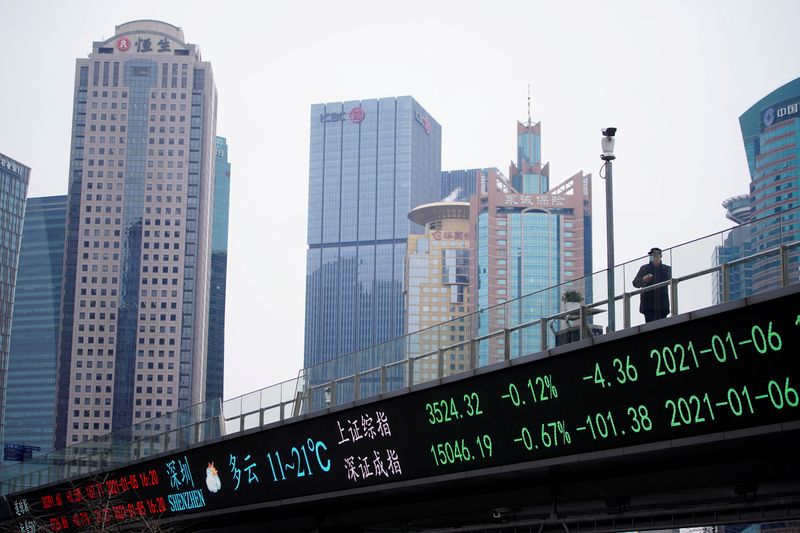 LONDON (Reuters) – World share markets inched higher on Wednesday after a stunning reboot in U.S. tech stocks, while the dollar and benchmark government yields both ticked up ahead of a key U.S. Treasury auction and inflation reading later.

But gains were subdued after Tuesday’s 20% surge in electric car doyen Tesla (NASDAQ:TSLA), 4% jump in the Nasdaq and biggest one-day gain for global heavyweights Amazon (NASDAQ:AMZN) and Microsoft (NASDAQ:MSFT) in well over a month.

Asia had bounced back from a two-month low as China’s markets shrugged off their recent central bank policy tightening worries and Europe was helped early on by a new all-time high for Germany’s DAX.

The dollar and bond yields ticked up too. Traders were focused on the U.S. bond auction and inflation data later, as well as Thursday’s European Central Bank meeting where it is expected to respond to the recent jump in borrowing costs.

Mikhail Zverev, head of global equities at Aviva (LON:AV) Investors, said Tuesday’s wild moves in big U.S. tech underscored how volatile markets, which are increasingly dominated by super-sized passive funds, are likely to be this year as the world tries to reset after the COVID-19 pandemic.

“The winds are blowing harder now. The world isn’t a more dangerous place, a mild increase in interest rates is not a cataclysmic event… but there is now the big-herd mentality with a greater propensity for rotations,” he said.

“They are moving more frequently, they are moving faster and they are leaving a trail of inefficiency,” leaving markets vulnerable to big swings, he added.

Gains in Asian stocks overnight came after Chinese shares had fallen to their lowest levels since mid-December the previous day on the prospect of tighter policy and a slowing economic recovery.

News that a $1.9 trillion U.S. coronavirus relief package was nearing final approval had sparked a global spike in bond yields on Monday. That had pushed the Nasdaq more than 10% below its Feb. 12 closing high, confirming a correction for the index.

Yet, many market investors remained on edge, with the next tests of investor appetite for government debt due later this week in the form of 10-year and 30-year auctions.

“Although the bond market has steadied a bit, pressures will remain,” said Naokazu Koshimizu, senior rates strategist at Nomura Securities.

Some investors see a real risk of an overheated U.S. economy and higher inflation on the back of the planned government spending boom.

U.S. consumer price data due at 1330 GMT is expected to show a slight acceleration in the overall inflation in February, with analysts expecting further gains in coming months due to base effects from a severe economic downturn in early 2020.

The speedier rollout of COVID-19 vaccines in some countries and the planned U.S. stimulus package helped underpin a brighter global economic outlook, the Organisation for Economic Cooperation and Development said on Tuesday, as it raised its 2021 growth forecast.

In foreign exchange markets, the dollar was supported by expectations of faster U.S. economic recovery.

The Australian dollar shed 0.6% at one point to $0.7672 as well after the country’s top central banker rebuffed market chatter about early rate increases.

Oil prices, which have surged 30% since the start of the year, steadied meanwhile as concerns over a supply disruption in Saudi Arabia eased.