Falling yields dragged the dollar lower ahead of tomorrow’s US inflation report, a possible leading indicator on the path of interest rates. Futures on the Dow, S&P, NASDAQ and Russell 2000 wavered in pre-US open trading on Wednesday as markets tread water ahead of the key economic indicator.

US futures and European stocks, including the STOXX 600 were in a holding pattern, with traders fingers hovering above order buttons.

Yields on the 10-year Treasury fell sharply toward the 1.5% mark. 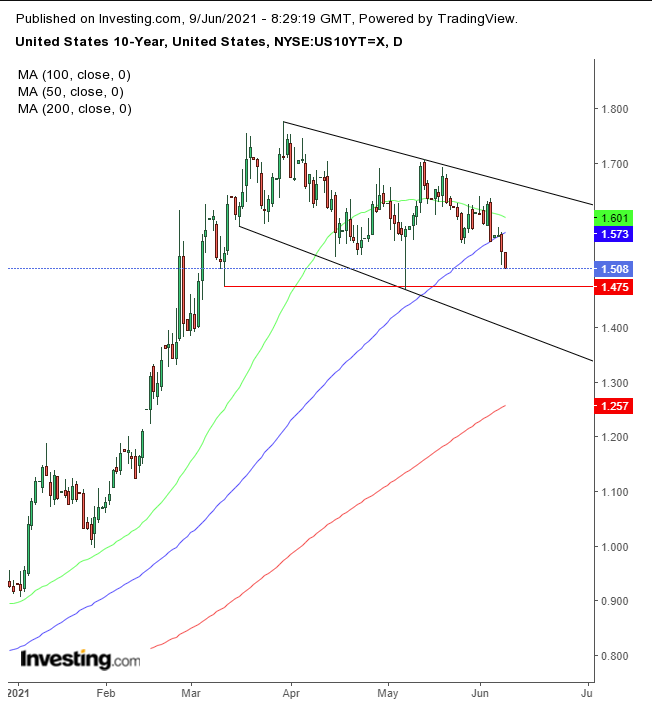 A report showing rising inflation may be the last straw before rates complete a bearish pattern—a Descending Triangle, whose implied implication is a drop of 30 basis points to retest 1.20%.

The dollar fell on pessimism, as traders watched falling yields scream rising inflation, which would weaken the American currency’s buying power. Although the Fed is holding firm on tightening its accommodative monetary strategy, some commentators continue to argue that the US central bank is, in fact, signaling—albeit slowly—that it’s headed toward tapering.

The chart projects this fork-in-the-road. 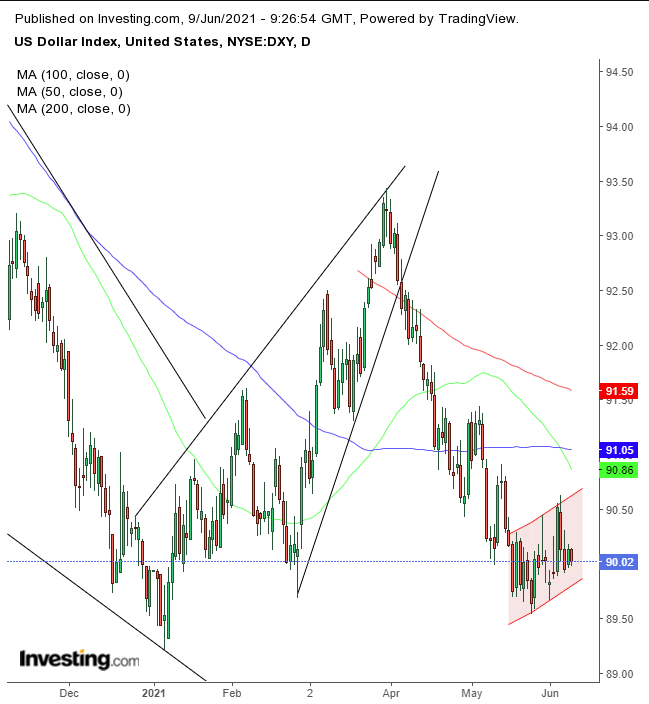 The dollar has been struggling to rise after a 4% drop following a rising wedge. However, that bearish pattern was a product of a massive falling wedge since the March 2020 peak. The current rising congestion could turn out to be a rising flag, whose downside breakout may be all that it takes to break the January 2020 low, on its way to challenge the 2018 low.

If that is crossed, we might see the greenback heading back toward its 2011 low below 73. The 50 DMA crossed below the 100 DMA, after not daring to near the underside of the 200 DMA. So, it doesn’t look good. However, if the price does provide an upside breakout, we could see our recent bullish call vindicated.

Gold fell for the second day, despite dollar weakness, which is rare, suggesting perhaps technical influence. 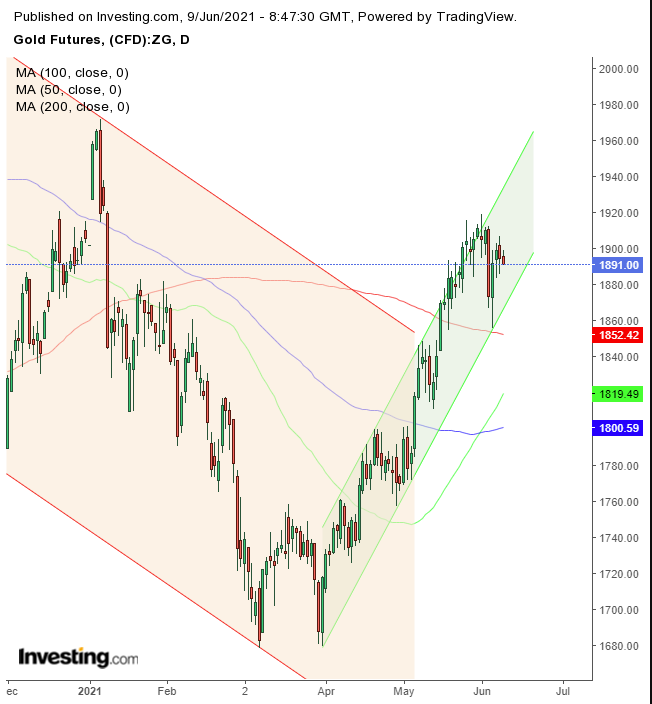 Gold is falling toward the bottom of its rising channel, which helped the yellow metal breakout of a falling channel since its August peak. On Friday, gold confirmed the channel’s integrity, which has been cemented by the 200 DMA. The 50 DMA crossed over the 100 DMA, eyeing the 200 DMA for a potential Golden Cross.

Bitcoin bounced, after El Salvador became the first country to adopt the digital coin as legal tender. Analysts see the $30,000 level as a red line, which if broken can open the door for the cryptocurrency to reach $20,000. We set the breaking point at $29,000. 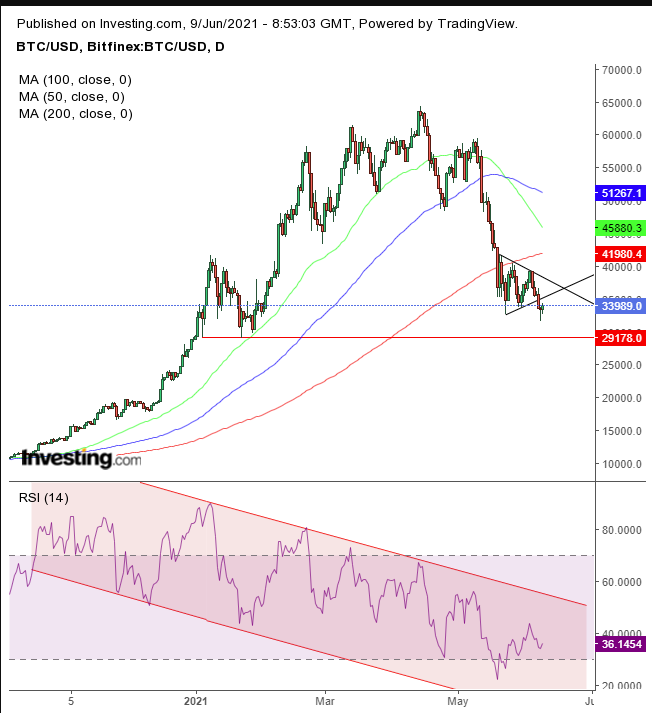 It’s likely that BTC may break Tuesday’s hammer’s support, considering the price completed a bearish pennant. However, if it breaks the $29,000 level, there may be no floor for the leading crypto.

API reported a 2.11 million barrel drop in US inventory, demonstrating improving demand, pushing the price above $70.50, for the first time since mid-October 2018. 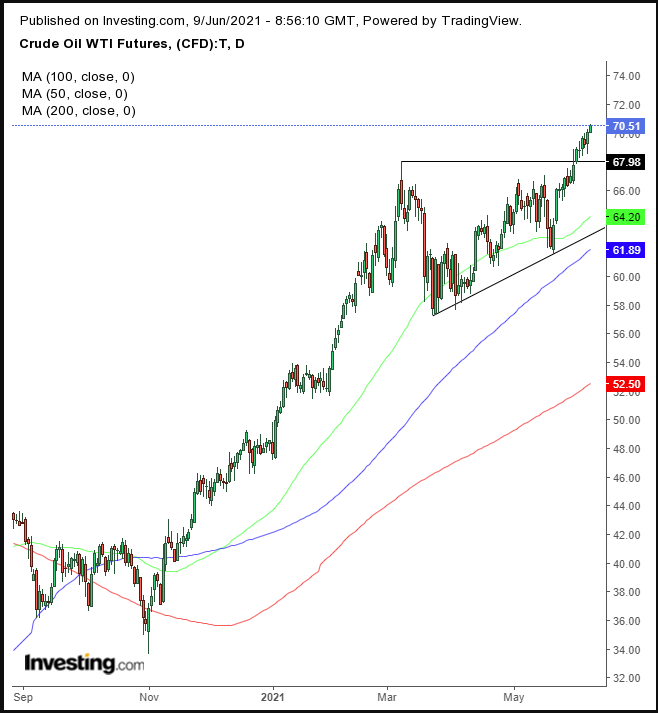 Oil completed an ascending triangle, demonstrating how demand is absorbing all available supply and upping bids to extend the underlying uptrend.