US yields rose with futures on the Dow, S&P, NASDAQ and Russell 2000 as well as European stocks on Tuesday following yesterday’s inflation concerns which led stocks to sell off.

The dollar was higher but the gold slump continued. Bitcoin reached a new record.

European shares rebounded from Monday’s selloff thanks to promising economic data from China which gave investors a shot in the arm and boosted confidence in the economic recovery. Traders are keenly awaiting US inflation data which will be released at 8.30am EST.

On Friday, Germany reported that industrial production there fell for the month of February. However, in the UK the news that the country’s GDP figures were lower than expected, weighed on the FTSE 100. The British economy grew by 0.4% in February compared to the 0.6% expected.

Another reason for the disparity may be the values of their respective currencies, as the pound strengthened versus the euro, making its products less competitive on the global stage. 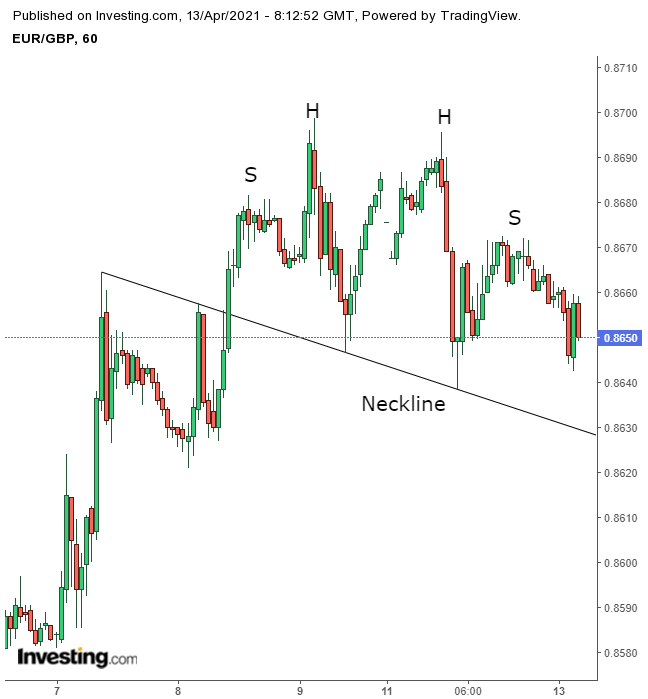 The EUR/GBP is developing an hourly H&S top. Notice how the previous resistance precisely became the current support.

The US 10-year yield re-approached the 1.7% mark, leading European yields. Global stocks have sold off since March, when investors decided that rising Treasury yields were no longer an indication of an economic recovery but a predictor of rising inflation. Concerns emerged that the Fed would raise rates, despite its insistence to the opposite, which would—it was feared—undo any of the good from the unprecedented quantitative easing and fiscal supports.

Attention will be on today’s US consumer price index release which is forecast to have gained 0.5% in March, up from February’s 0.4% climb. This data became paramount after the Fed suggested it would give the economy a long leash, to allow it to rebound from its pandemic related ravage. If the CPI rises more than expected we might see a range-breakout for Treasuries. 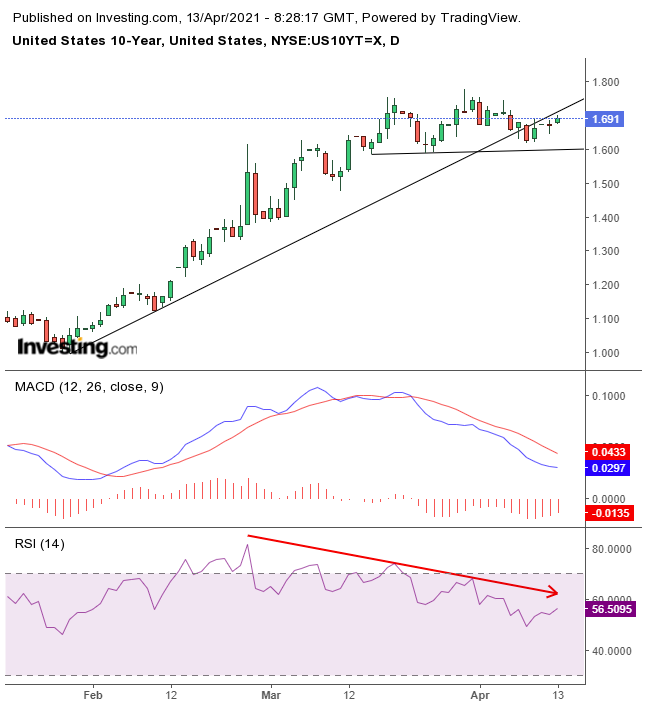 Rates have been under pressure, having fallen below their uptrend line and forming a potential top, with a bearish MACD and negative RSI divergence.

However, an unexpected inflation spike would return Treasuries into a selloff, pushing yields to blowout the bearish pattern, catapulting them all the higher. This will also restart to the reflation trade, which has been fizzling.

A rise in yields would also boost the dollar, which has been languishing since last week. 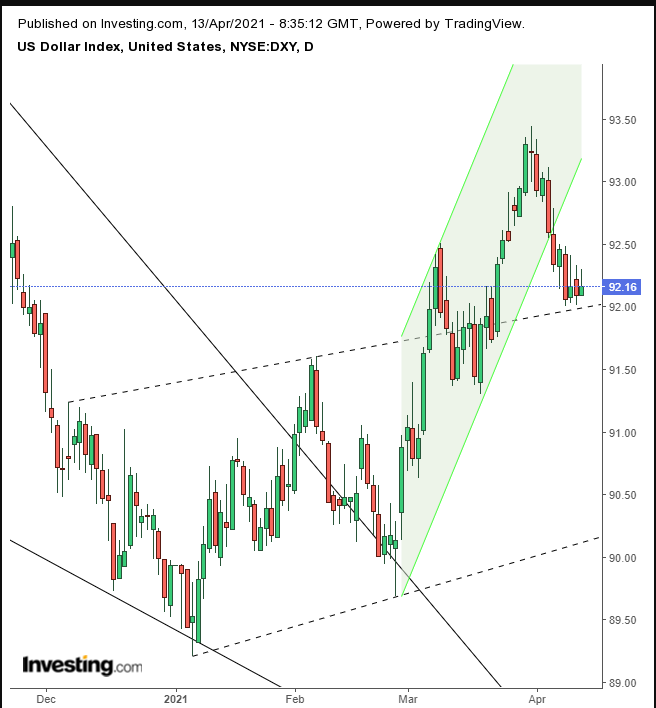 Notice that despite the range, the dollar found support by a previous resistance, though it did fall out of its rising channel. While that may be a bearish signal, it could simply mean that the channel was too steep. Overall, we expect the dollar to rise after completing a huge falling wedge since the March peak, that could return the greenback there.

Gold fell for the third day while yields were rising. 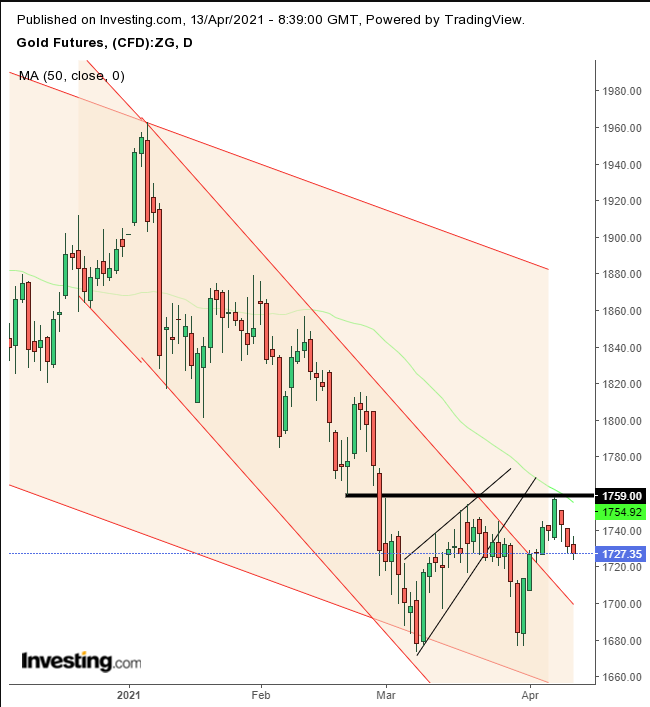 From a technical standpoint, gold found resistance by the top of a bearish flag. 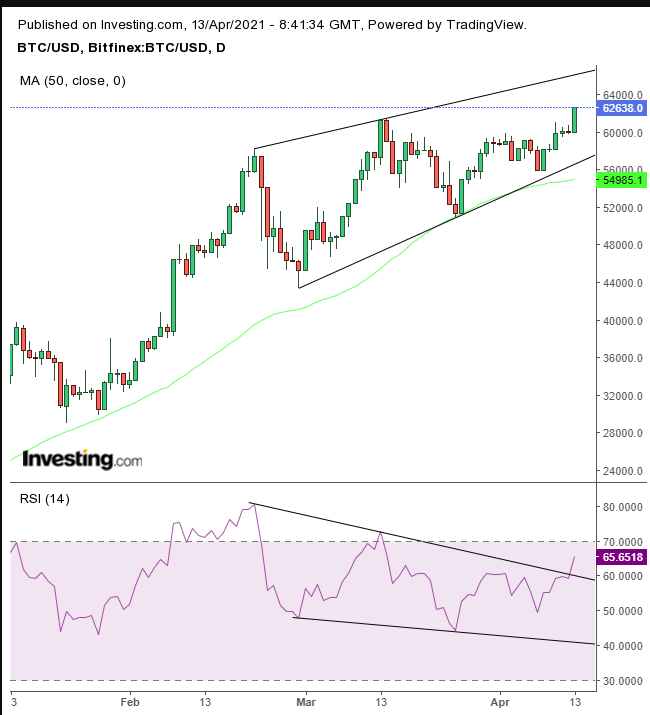 Keep an eye though on the potential wedge formation, though the one in the RSI is being blown out, as of now, a bullish sign.

Oil was trading smack on the neckline of a H&S top whose right shoulder is a bearish rising flag. 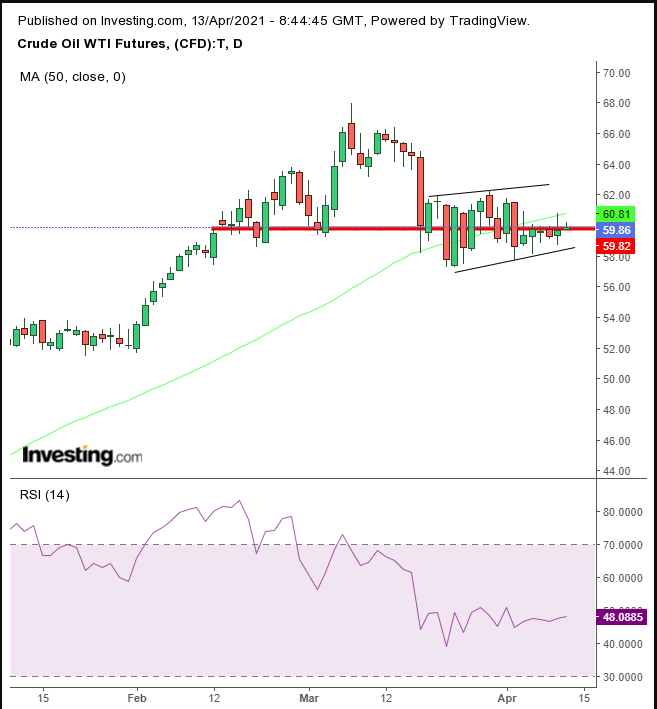 An uneven global recovery, mired by exponentially rising COVID cases in different parts of the world that are unable to vaccinate fast enough, is weighing on the outlook for demand.