With Fed policymakers intensifying their efforts to downplay inflation expectations, on Wednesday, US futures for the Dow Jones, S&P 500, NASDAQ and Russell 2000 all advance along with European stocks.

Gold jumped and the dollar eased.

Fed Vice Chair Richard Clarida said the economy could absorb spiking inflation and that his central bank could handle it. San Francisco Federal Reserve President Mary Daly said in a CNBC interview that the economic rebound is encouraging, it is “way too early” to remove accommodation.

All four US contracts were in the green this morning, signaling the underlying indices could rebound from yesterday’s declines after home sales and consumer confidence data indicated higher prices were hurting demand, offsetting dovish reassurances from Fed members.

The STOXX Europe 600 Index climbed as ECB board member Fabio Panetta joined the Fed’s chorus, saying the ECB should not yet scale down its asset purchasing program. The pan-European benchmark added value for the fifth straight day, its longest winning streak of the year so far, putting a fresh record close on the table.

British retailer Marks & Spencer Group (LON:MKS) surged as much as 6.3% today, despite posting an 88% plunge in its annual profit. The stock touched its highest levels since March 2020, but settled at a 4.2% gain at time of writing, it’s move courtesy of rebounding consumer demand.

Paris-based multinational food company Danone SA (PA:DANO) was down as much as 1.8% in early trade but appeared to have found its footing, closing the gap to 0.7% at of time of writing, after German investment bank Berenberg downgraded the stock to “sell,” citing the challenging low-growth nature of most of its categories. 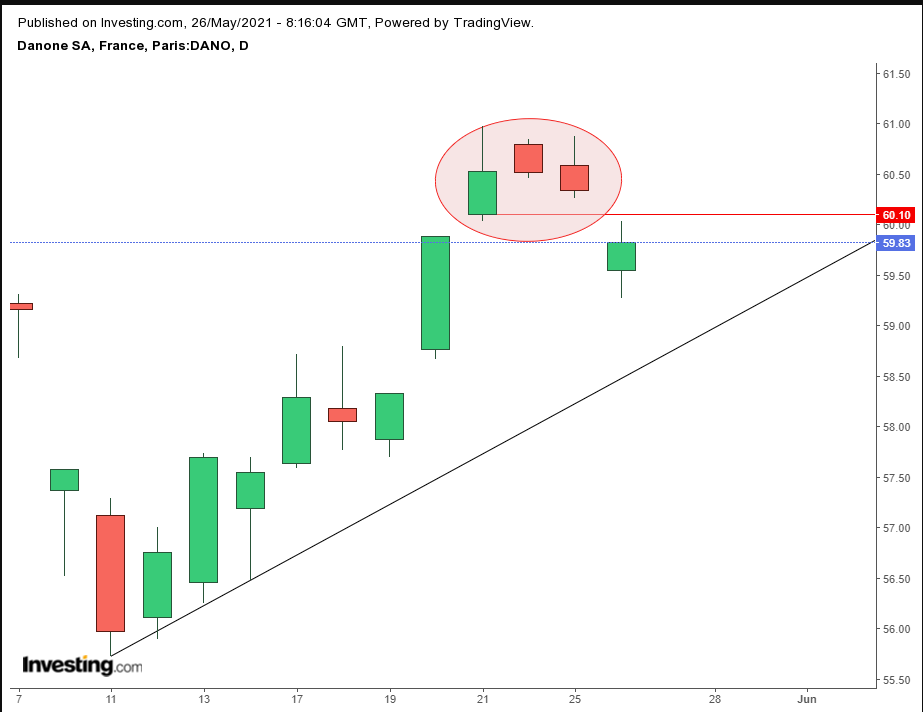 The decline was in the form of a falling gap, which completed an Island Reversal top, suggesting at least a retest of the uptrend line.

On Tuesday, during the Wall Street session, US investors reconsidered the inflation-fears scenario, which weighed on US equities as all four major indices closed lower.

Fed Vice Chair Clarida noted that all the price pressures business executives and big name investment firms were cautioning about, and which have been warned about by the likes of Warren Buffet, will “prove to be largely transitory;” that statement has become something of a Fedspeak mantra.

Irrespective of the central bank assurances, some investors remain skeptical that the Fed can keep the lid on economic overheating.

After a four-day decline, yields, including for the 10-year note, have found their footing. 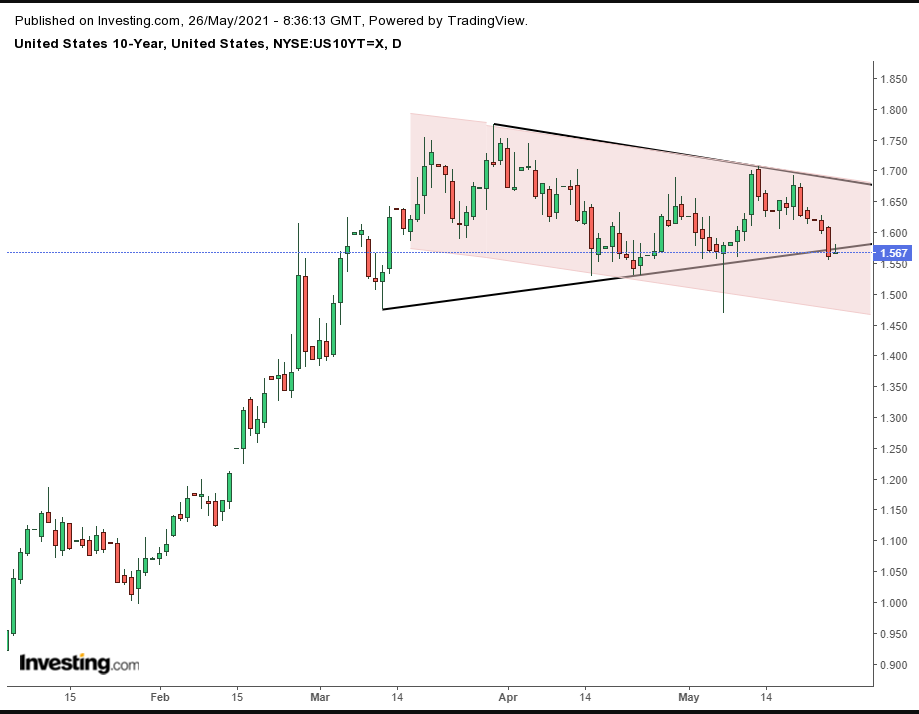 Rates have struggled at the bottom of a symmetrical triangle, whose natural inclination would be to resume its underlying uptrend. However, a downside breakout would flip the trend, allowing yields to continue lower along their falling channel.

The dollar rebounded from a two day drop. 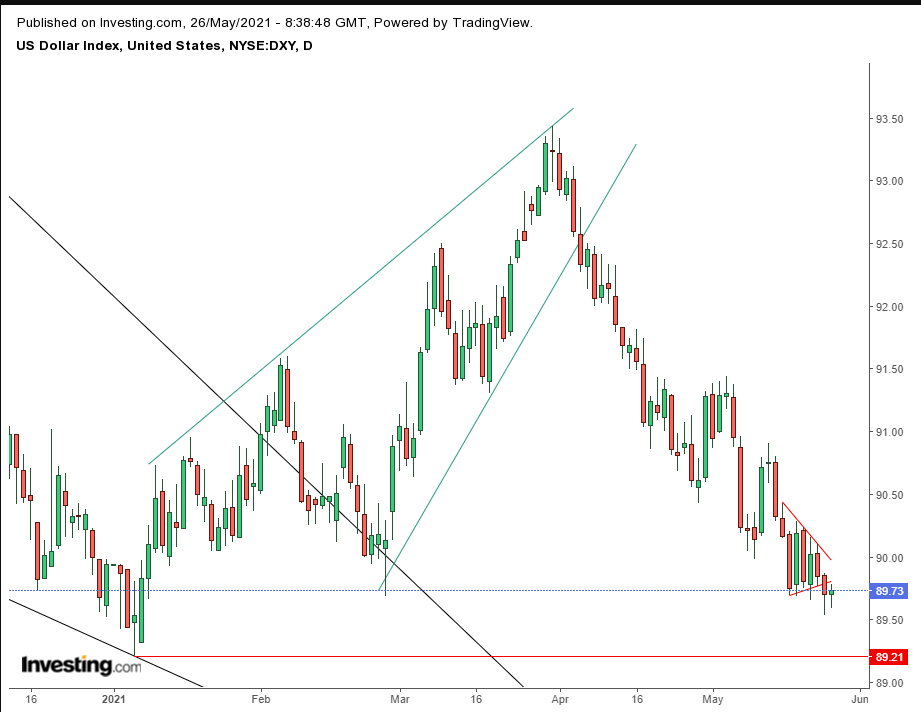 The global reserve currency continues to struggle between a bearish pennant—indicating the potential resumption of the downtrend from a rising wedge developed from February to March—and a massive falling wedge developed between the March 2020 peak and February 2021.

Despite the market narrative of fading inflation concerns, gold jumped for the fourth out of five days, to its highest level since Jan. 7. 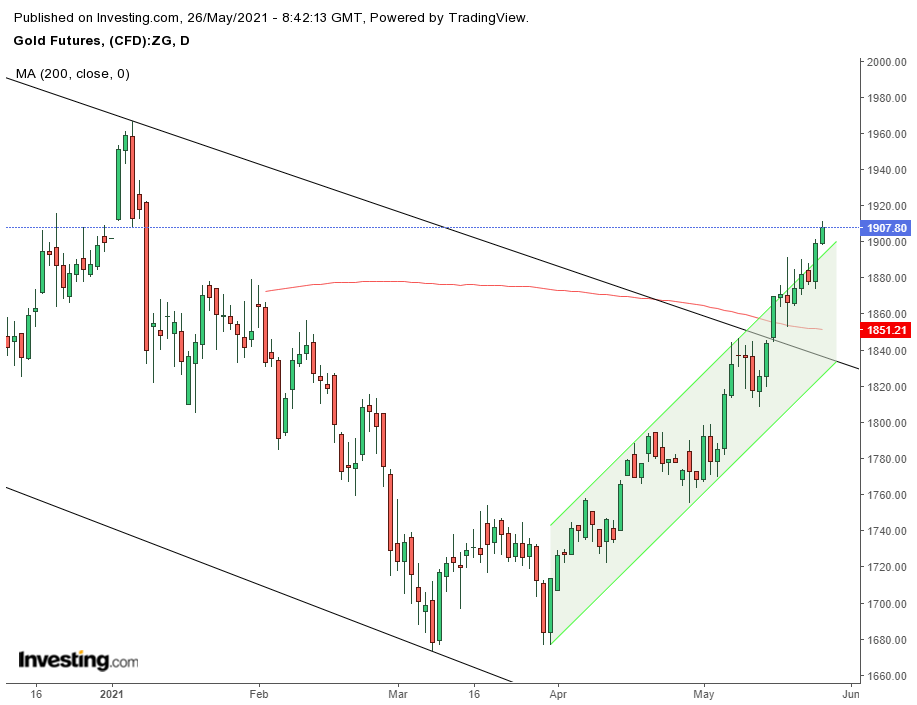 The yellow metal developed a full candle above its rising channel, suggesting it is breaking away from it, forming a steeper incline. Though some are waiting for it to hit $2,000, we would still expect a dip following the breakout of the massive falling channel, in place since the precious metal’s record peak in August, which included crossing over the 200 DMA.

Bitcoin is back above $40,000, having rebounded from a $30,000 low. After actualizing our bearish target, we’ve been bullish on the cryptocurrency. 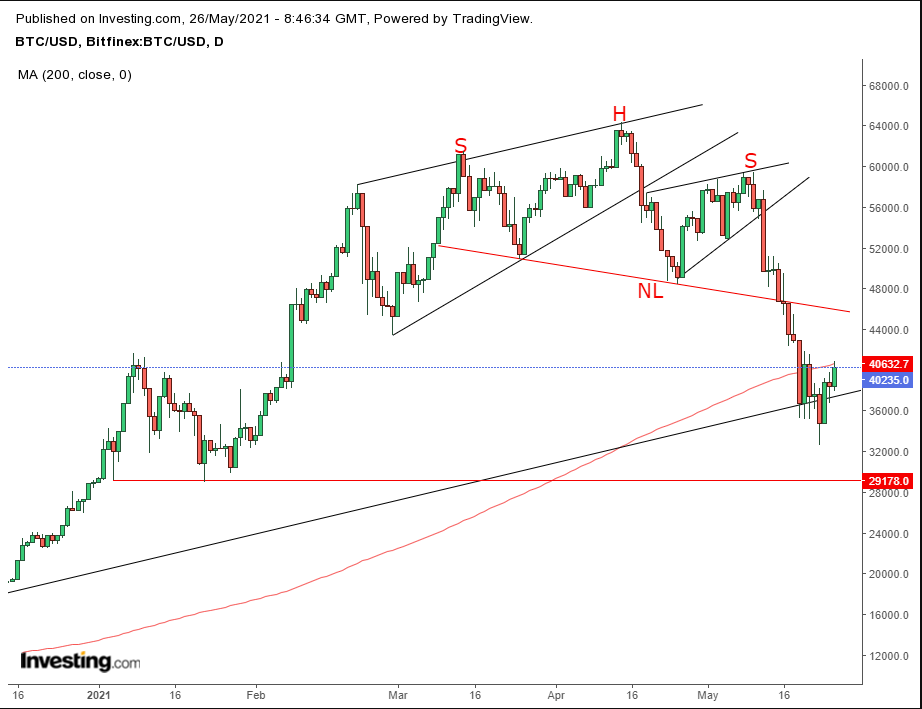 The digital token has found resistance by the 200 DMA. Still, investors need to be careful.

While the H&S top reached its implied target, traditional measuring rules don’t apply to this digital asset. We might be wrong about our current bullish call, and it may simply be a return move toward the neckline at $45,000, after which persistent supply could once again knock BTC lower, pushing it back down for another, lower leg. Should Bitcoin fall below $29,000, we’ll reverse our bullish call.

There are now two conflicting narratives for oil: as summer driving season approaches, an “oil supply crunch” could develop, supporting prices, or, the “possible return of Iranian supply” could begin to weigh on prices. 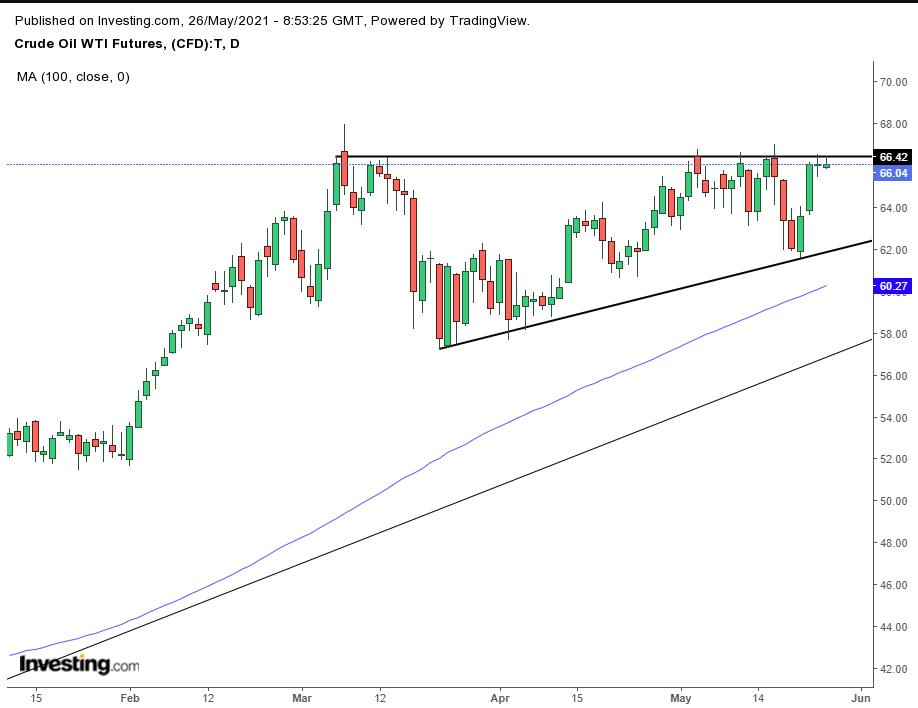 WTI has been struggling within a range since February, but the pattern emerging is bullish, an ascending triangle.