US contracts on the Dow, S&P, NASDAQ and Russell 2000 and stocks in Europe rallied on Thursday following positive political news out of the US yesterday. A deal to avert a US government shutdown in October had been hammered out; as well, Federal Reserve Chair Jerome Powell reiterated his assertion that price pressures are temporary, even if the current spike in inflation is “frustrating.”

The dollar softened but yields rebounded.

Yesterday, US Senate Majority Leader Chuck Schumer announced that lawmakers on both sides of the aisle managed to reach an agreement to keep the US government running. While the bill ignores the debt ceiling, investors breathed a sigh of relief.

Separately, yesterday ECB President Christine Lagarde reasserted her opinion that the current hike in inflation is merely transient and that once bottlenecks created by coronavirus shutdowns are cleared, prices will settle. This oft-repeated promise gave speculators with nerves the encouragement to buy the dip.

All four US futures were deep in the green this morning, with the Russell 2000 gaining the most, up 0.9%. Futures on the S&P 500 Index were up almost 0.5% after the underlying benchmark rebounded on Wednesday from a two-month low.

Investors found new hope in the economic recovery, enabling them to swallow the bitter pill of rising bond yields. Optimism in the continued expansion of the economy is what drove Russell 2000 contracts to outperform, as it lists smaller, domestic firms that are sensitive to the business cycle.

In the Asian session, regional equities wiped out early losses as markets whipsawed due to signs of a continued slowdown in China. Factory activity there fell in September for the first time since the global pandemic began.

As often happens, stocks in Hong Kong paid the price, as it is the market which many foreign investors use to trade Chinese stocks. The financial hub’s Hang Seng dropped 0.36%, underperforming the region. Australia’s ASX 200 soared 1.9%, driven by the rising iron ore prices that lifted European stocks. With the help of rising bank stocks, the benchmark snapped a two-day rout.

Treasury yields on the 10-year note, which have been blamed for the recent sharp selloff, rebounded from a would-be second day low. Also, yields trimmed half of their Wednesday decline, demonstrating continued demand for Treasuries which is ominous for equities. 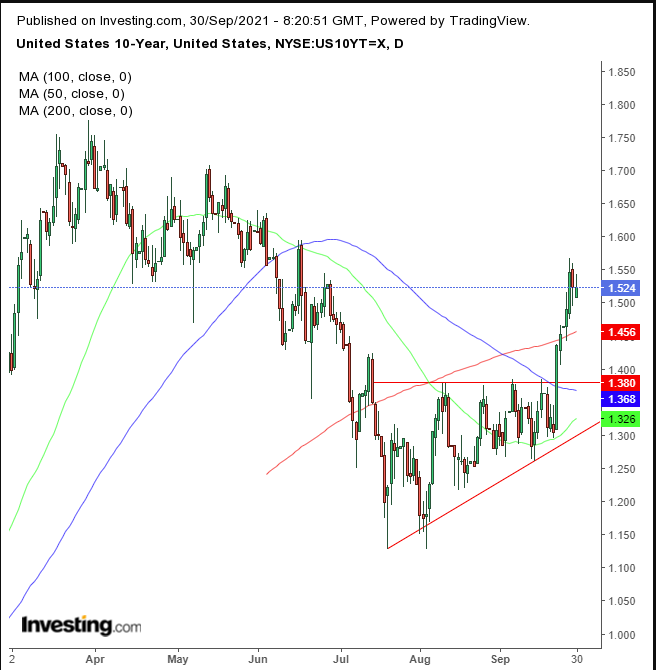 Having completed an ascending triangle, prices are likely to fluctuate.

The dollar eased after a three-day run that took it to its highest level since November. 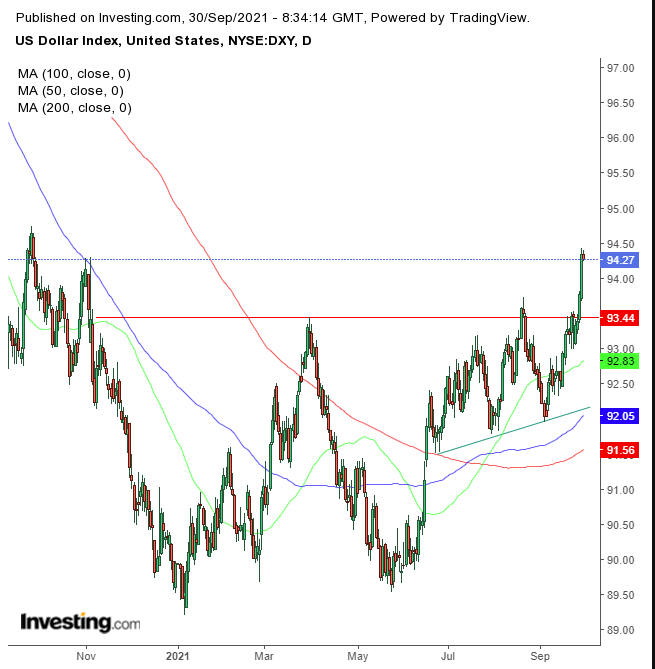 The recent rally blew out a H&S top and completed a huge double-bottom.

Gold has been pressured by the USD’s advance, but not proportionately. The recent selloff in stocks had investors hiding their money in safe havens. 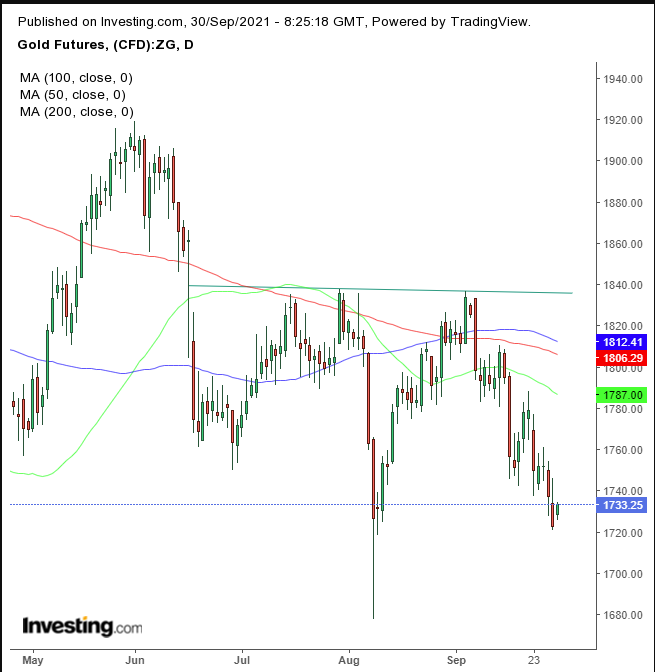 Although the precious metal is pressured now by a Death Cross—the price fell below the June 29 low, the possible left shoulder of a H&S bottom—it’s still in play.

Bitcoin jumped after SEC Chief Gary Gensler repeated his support for Bitcoin futures ETFs. However, from a technical perspective, this could be a dream short. 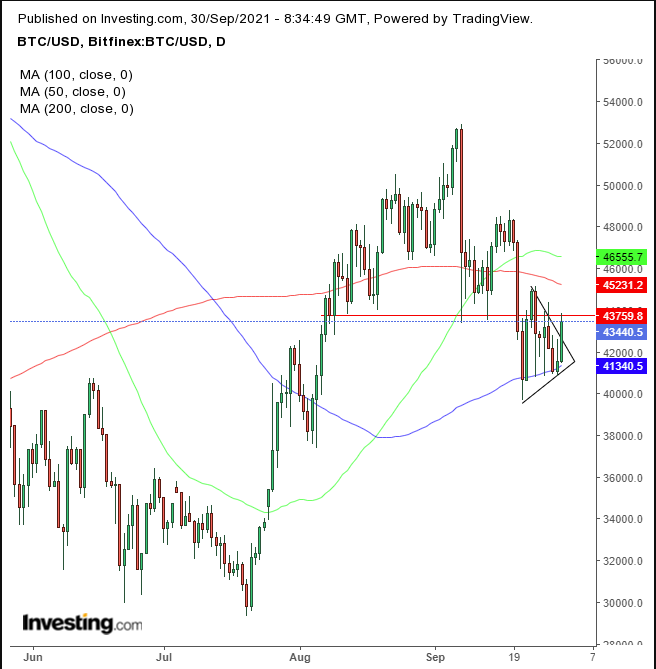 The cryptocurrency is testing both a bearish pennant and the neckline of a H&S bottom. From aggressive traders’ point of view this provides an ideal short entry from a risk-reward perspective.

Oil came back from a second daily decline, heading for a monthly advance thanks to tighter supplies. Yet, even with higher prices WTI, US shale producers aren’t stepping up production. 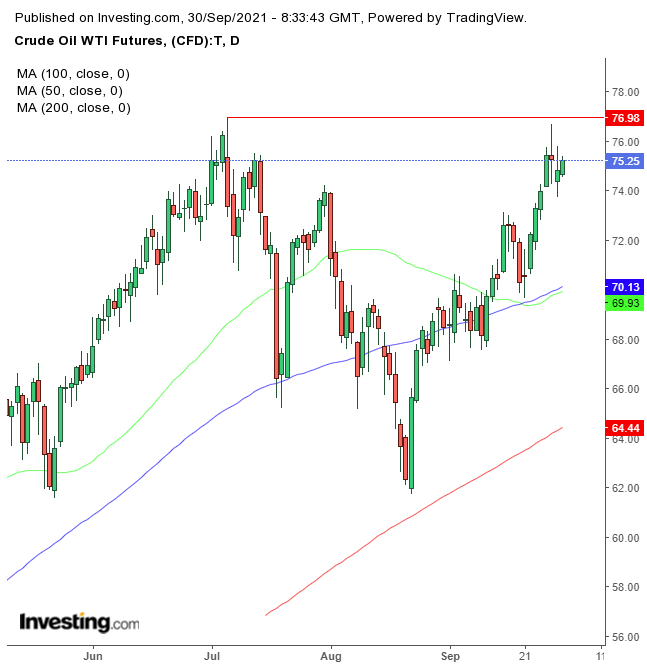 Technically, crude must still contend with the likely resistance of the July 6 peak.