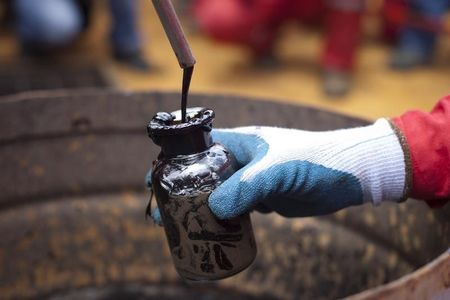 By Liz Moyer and Barani Krishnan

Investing.com — Oil prices rebounded on Wednesday, snapping a two-day slide, as the market looked beyond government data indicating that output was recovering faster than refining after last month’s storm-related outages in Texas.

Futures of New York-traded West Texas Intermediate, the benchmark for U.S. crude, initially fell on the Energy Information Administration’s weekly petroleum supply-demand report. WTI had fallen more than 3% over two previous sessions on some concerns that the four-month long rally in oil may be getting ahead of itself.

The agency also revised upwards refining activity to 69% of capacity at the end of last week, versus the previous week’s record low of 56%.

Initially, the production estimate dominated the market’s attention, helped by another outsized build in crude stockpiles that came after the previous week’s monster pile-up caused by the mid-February Texas storm.

Crude inventories rose 13.798 million barrels last week, compared with analysts’ expectations for a build of 816,000. The prior week’s build was 21.5 million barrels, even higher than the 19.2 million-barrel increase seen during the week to April 10, 2020, when demand for oil cratered amid the COVID-19 outbreak.

“The production number is important because when you take the additional 900,000 barrels per day in the EIA’s mark-up and multiply that over the seven days of the week, you get another 6.3 million barrels in theory,” said John Kilduff, partner at New York energy hedge fund Again Capital.

“Put that higher production estimate next to the crude build itself that came in at 13 million barrels more than thought, and you’re certainly going to get some raised eyebrows. But to be fair to the EIA, they also reported bigger drawdowns than anticipated in fuel. That’s what’s helping to limit the market’s downside.”

Distillate stockpiles, which include diesel and heating oil,  fell 5.5 million barrels against expectations for a draw of 3.53 million barrels, the EIA data showed.

Texas, the epicenter of U.S. energy production and refining, is known for its sweltering weather for most of the year. But after the Arctic blast that hit on Feb. 17, it looked like a white blanket.

Texas is known for maintaining temperatures of between 60°F (15.6°C) and 70°F (21.1°C). But the deep-freeze in the “Lone Star State” after this year’s winter storms was so bad that oil and gas couldn’t flow like normal in several key production basins.

“Infrastructure in Texas, such as wellheads, gathering lines, and processing facilities, are more susceptible to the effects of extremely cold weather,” the EIA said in its Short Term Energy Outlook report for March, released Tuesday.

Following repairs to the Texas infrastructure and resumption of normal weather, U.S. production for March was expected to return to 11 million bpd, the agency added in the STEO report.