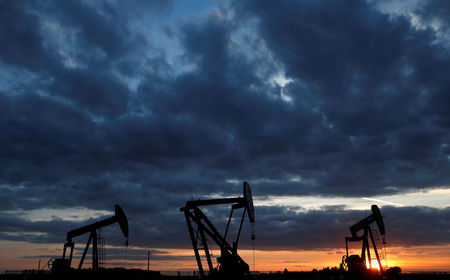 (Bloomberg) — Oil declined in Asia as traders monitored efforts to dislodge a massive ship blocking the Suez Canal, following two wild days that saw prices whipsaw around 6% in both directions.

Futures in New York slid 1% after prices rose back above $61 a barrel on Wednesday, clawing back almost all of the losses in the previous session. Work to re-float the container ship that’s stuck in the canal — a key trade route for crude flows to Asia — was suspended until Thursday morning in Egypt. The blockage has led to a gridlock of vessels waiting to pass.

The bounce in oil following the canal incident gave the market a much needed breather after a series of factors including softening demand combined to drive prices to a six-week low on Tuesday. U.S. crude stockpiles, meanwhile, have continued to climb, although domestic fuel consumption has expanded.

Despite the recent sell-off, oil is still up about 25% this year and there is confidence in the longer-term outlook for demand as coronavirus vaccinations accelerate worldwide while OPEC+ output cuts tighten supply. The group is scheduled to meet next week to decide production policy for May in a gathering that will be keenly watched by the market.

The prompt timespread for Brent flipped back into a bullish backwardation on Wednesday after ending in a bearish contango in the previous session for the first time since January. It was 16 cents in backwardation compared with 67 cents at the start of the month.