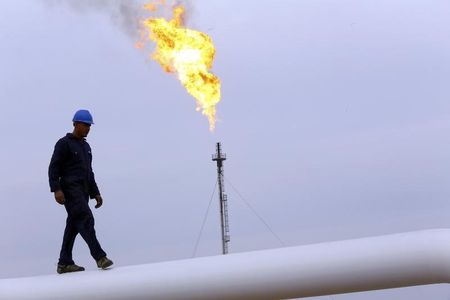 Investing.com – Oil prices jumped 4% Thursday as the OPEC+ producers’ alliance bucked expectations for a hike in output starting in April, with cartel leader Saudi Arabia sticking to its 1 million barrels per day cut while Russia and Kazakhstan opted for just modest increases.

Going into the meeting, the Saudis, who head the 13-member Organization of the Petroleum Exporting Countries, along with Russia, which steers another 10 nations to form the so-called OPEC+, were expected to agree on a total output hike of up to 1.5 million bpd from April.

Crude prices had come off some 5% between Friday and Tuesday on such talk, before rebounding Wednesday on speculation that the Saudis might roll over the 1 million bpd cuts they had enforced since February while allowing the Russians and Kazakhs — the two in the 23-member coalition that most wanted to raise production — a combined increase of 500,000 bpd.

The icing on the cake, of course, was Riyadh’s refusal to add even a single barrel as Saudi Oil Minister Prince Abdulziz bin Salman relished his role once again as a market spoiler for crude bears.

Abdulaziz, and his half-brother, Saudi Crown Prince Mohammed bin Salman — typically referred to by his initials MbS — were the architects of the kingdom’s decision in January to volunteer 1 million barrels per day in Saudi output cuts on top of existing production control commitments Riyadh had made to OPEC+ since April last year to shore up crude prices that collapsed in the aftermath of the Covid-19 outbreak.

Analysts are debating how long the Saudis can continue making such cuts and risk losing their market share to more aggressive U.S. exporters, who aren’t a part of OPEC+. The United States was the largest crude producer in the world up until the Covid-19 outbreak, turning out a peak of 13.1 million bpd. U.S. crude production has fallen drastically to just around 10 million bpd since. But it can rebuild both output and exports if prices continue to rise, analysts said.

On the whole, OPEC+ has been withholding at least 7 million barrels per day of oil from the market over the past 10 months, significantly draining a glut in global crude inventories to near five-year normal levels. The alliance’s actions have succeeded in bringing U.S. crude from a historic negative pricing of -$40 per barrel in April 2020 to the current 13-month high.