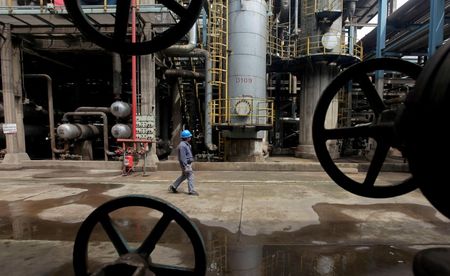 Investing.com – U.S. oil stockpiles unexpectedly rose last week despite a cold snap sweeping across Texas that shut in production across the oil-rich state and left millions without power.

U.S. crude inventories rose 1.026 million barrels last week, according to an estimate released Tuesday by the American Petroleum Institute, after a fall of 5.8 million barrels the previous week. Still, the unexpected build was hardly surprising according to some market participants in the wake of a refinery capacity that was down.

Crude Oil WTI Futures, the U.S. benchmark for oil, fell 42 cents a barrel after settling down 3 cents, at $61.67 per barrel.

Oil prices made a strong start to the week on Monday after Goldman Sachs hiked its price target on Brent crude oil to $70 in the second quarter and $75 in the third, from prior forecasts of $60 and $65 respectively, citing expectations for tight oil markets this summer.

“We now forecast that oil prices will rally sooner and higher, driven by lower expected inventories and higher marginal costs — at least in the short run — to restart upstream activity,” Goldman said in a note.