The Mexican Peso looks set to resume its bullish trend next week after struggling to break key levels against currencies like the US Dollar and the Euro. A resurgence in Covid-19 cases in some parts of the world has left risk-assets slightly unsupported this past week, with USD/MXN creeping back up to the 20 Peso mark whilst EUR/MXN attempted to undo the gains seen the week prior.

The fundamental picture remains pretty positive in the medium-term, with vaccination programs advancing and lockdown measures softened in many countries, although the light at the end of the tunnel is not visible just yet. India recorded its highest daily death rate this week, with new infections soaring above 300 thousand a day, and hospitals facing a critical shortage of oxygen.

In Mexico, the amount of new daily cases has dropped off significantly in the last few weeks, although the country has faced an elevated rate of daily deaths in the last week, which has broken the descending trend of the last few months. There is also a vaccine shortage in the country, which is causing its vaccination rate to fall behind other LatAm and developed countries.

But, overall, the situation seems to be improving and the latest economic data shows that the country is slowly getting on the path back to recovery. Most recently, the half-month CPI data shows a 0.06% growth in prices in April so far, with the core reading as high as 0.18%. This puts further pressure on Banxico – Mexico’s Central Bank – to decide whether it wants to focus on keeping prices stable or on achieving full employment and aiding economic growth.

We’ve seen other Central Banks around the world start to show a more hawkish message as economic figures show improving economies, but the likelihood of rate hikes is still pretty far away for most developed economies. But Mexico may be one step closer and there will be special attention to the message delivered by Banxico in its next meeting on May 13th. Any sign that monetary policy may become less accommodative would be positive for the Mexican Peso and we would start to see the carry trade argument come back into play. 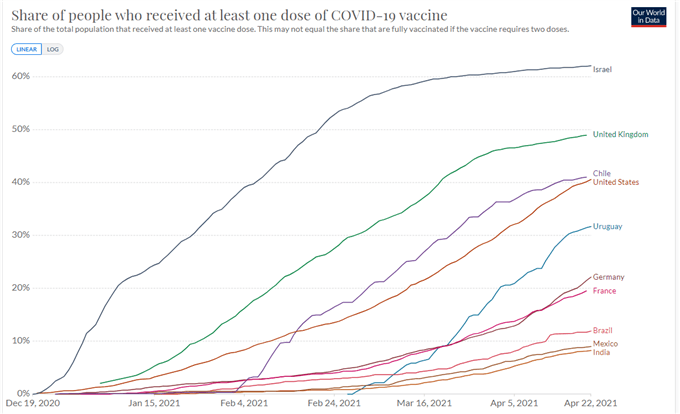 Once again USD/MXN is struggling to move below 19.87, an area of consistent support over the past 5 months. The last two weeks of sideways consolidation have caused the descending trendline to fall below current price, which means the pair is likely to face increased buyer resistance when trying to trend lower.

The pair has also been consistent with its resistance on the topside over the last week, being unable to break above the 20 peso mark despite some Peso weakness. I wouldn’t be surprised if USD/MXN drifts sideways this coming week but I would expect the tendency to be skewed to the downside, with a break below 19.78 as the key objective.

The Mexican Peso holds its ground against the US Dollar despite slow vaccinations and a move away from risk.
Read more at : https://www.dailyfx.com/forex/fundamental/forecast/weekly/title/2021/04/25/Mexican-Peso-Weekly-Forecast-USDMXN-Bears-Remain-in-Control.html