A wave of risk aversion spread through global financial markets last week, pushing major equity indexes across the United States, Europe and Asia lower. The Dow Jones Industrial Average (DJIA) shed over 1%, while the technology-heavy Nasdaq-100 Index (NDX) outpaced those losses, dropping over 2%. Investors were unimpressed with a set of high-profile earnings reports, including Google, Apple and Amazon.

Elsewhere, energy markets caught a bid as European regulators embraced a previously shunned move to cut off Russian oil exports. Germany’s Economy Minister Robert Habeck, on Thursday, said “We have made a lot of progress on oil and could join an embargo if it happened.” That capitulation was viewed by the market as a green light for the 26-member bloc to move forward on an embargo, although a plan has not yet been released. Brent crude oil prices rose more than 2% through Friday.

The US Dollar and equity markets will be front and center for traders on Wednesday, with the Federal Reserve slated to announce a 50-basis point rate hike. Rate traders are also expecting details on the Fed’s plan to draw down its balance sheet, which ballooned to more than $9 trillion through the pandemic. The DXY index, which hit a multi-decade high, may sell off on the announcement given the market’s rapid repricing of rate hike bets in the overnight swaps market over the past several weeks, a possible “sell the news” event.

Alternatively, if the Fed underdelivers against hawkish expectations, markets may see the central bank falling back behind the curve on inflation. Such a move may bolster gold’s appeal to investors. The Bank of England (BoE) is another possible market mover in the days ahead. The British Pound succumbed to USD strength, dropping nearly 2% last week. The BoE is expected to hike its benchmark rate by 25-bps, and Sterling traders are on the watch for details on a plan to sell UK Gilts. Will GBP/USD continue to fall?

Also important, although flying under the radar, is the Treasury’s government-debt issuance plan, expected to drop before the FOMC announcement. The Treasury may increase its debt offerings to counteract any negative impacts on funding needs from a balance-sheet runoff. However, a strong tax receipt season helped bolster the nation’s bank account to over $900 billion, which should cover the current deficit account.

Rate traders appear split on whether or not the Reserve Bank of Australia will implement a 15-basis point rate hike. The hawk’s case for a hike is last week’s red-hot consumer price index (CPI) number for the first quarter. The RBA may remain in its relatively dovish stance, given the headwinds presented by the slowdown in the economy of its largest trade importer, China. Cash rate futures, on Friday, were pricing in just over a 50% chance for a hike. If the RBA opts to act, it may help underpin the ailing Australian Dollar.

The US April non-farm payrolls report will close out the US docket on Friday, when analysts expect to see 395k jobs added, according to a Bloomberg survey. Usually, the main event for markets, the jobs report is likely to play second fiddle to the Fed’s announcement. That doesn’t mean an outsized miss or beat wouldn’t have a market impact, however. Canada is also slated to release jobs data for April on Friday. The Canadian Dollar lost ground versus the Greenback despite higher oil prices.

China and its ongoing Covid-induced lockdown woes will remain under scrutiny. Beijing’s relentless pursuit of its “Zero-Covid” strategy has cast a cloud over the country’s economic growth outlook. The IMF, along with several big banks, have downgraded growth forecasts recently after Beijing locked down, adding to a growing list of restrictions in megacities that have strained the economy. The National Bureau of Statistics (NBS) is expected to report a second month of contraction in the manufacturing sector. A weaker-than-expected print could add to the Yuan’s troubles.

US DOLLAR WEEKLY PERFORMANCE AGAINST CURRENCIES AND GOLD 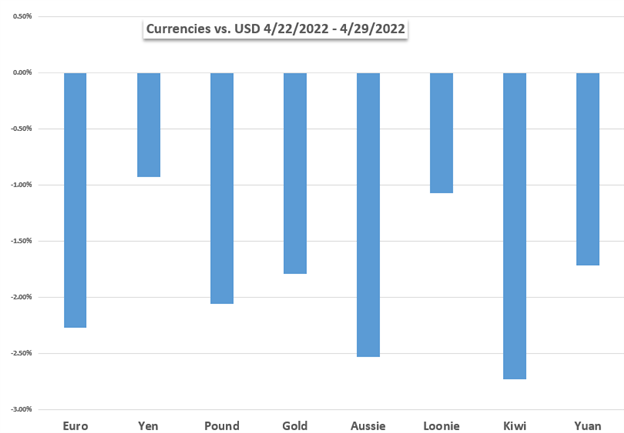 Traders face an event-heavy week with all eyes on the Federal Reserve’s interest rate decision. The implications for the US Dollar and gold could be huge. The US NFP report, RBA, BoE and China are …
Read more at : https://www.dailyfx.com/forex/fundamental/forecast/weekly/title/2022/05/01/Markets-Week-Ahead-Dow-Jones-USD-GBPUSD-AUDUSD-Gold-FOMC-NFP-China-RBA-BoE.html