Traders may have found some temporary relief from the United States, where Senators raised the debt ceiling through early December. Meanwhile, a non-farm payrolls miss was complicated by rising wages as the unemployment rate declined. That likely kept the door open to Fed policy tapering in November.

Energy prices capitalized on the rosy mood, further supported by rising demand expectations as the global economy gradually open up. Crude oil prices surged almost 5% as the Canadian Dollar outperformed its major counterparts.. Meanwhile, rising Treasury yields and a US Dollar that refused to come off from recent highs kept anti-fiat gold prices under pressure. The Yen fell.

A notable economic event risk in the week ahead is the September US CPI print. Elevated price pressures may keep the door open to Fed tapering being just around the corner. The FOMC meeting minutes are also in focus. Meanwhile, the earnings season kicks off the major US banks reporting. These include Bank of America and Citigroup.

Bitcoin may see some volatility as the White House announced it was weighing a wide-ranging push for cryptocurrency oversight. Elsewhere, the British Pound faces the next round of UK GDP data. The Australian Dollar awaits a speech from RBA Governor Philip Lowe. Meanwhile, the IMF will release the latest forecasts for the world economy. What else is in store for financial markets in the week ahead?

US DOLLAR WEEKLY PERFORMANCE AGAINST CURRENCIES AND GOLD 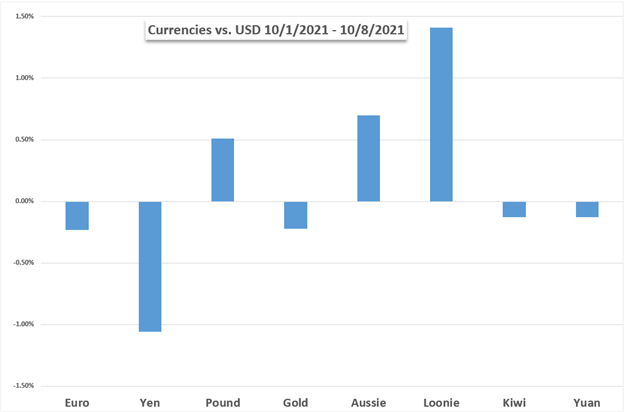 EUR/USD Forecast: What’s the Incentive to Buy the Euro?

The problem for Euro bulls is that it’s hard to think of any good reason to buy it; not just EUR/USD but the Euro crosses too.

The Australian Dollar is subject to external forces as commodities roar and risk sentiment sways under Chinese outcomes. Where to next for AUD/USD?

Bitcoin is up over $8k on the week with hardly a pullback seen during the latest move. The market leader looks strong but overbought, according to one technical indicator.

Despite a disappointing headline figure, the September US NFP report was another milestone on the road to the Fed tapering asset purchases.

The price of oil clears the $80 handle as OPEC remains reluctant to boost production, and current market may keep crude prices afloat amid the tepid recovery in US output.

The Canadian Dollar faces key technical barriers versus the US Dollar, Euro, and New Zealand Dollar this week. Here are the key levels to watch.

While the Australian dollar trades higher in October, it faces major headwinds in the days and weeks to come.

Gold has been trying to muster a rally, but unable to put together anything meaningful; lower prices lok likely ahead

US Dollar breakout marked a fifth week and while the broader outlook remains constructive, the rally may be at risk here. The levels that matter on the DXY weekly chart.

U.S. stocks present a mixed picture, with the S&P 500 and Nasdaq 100 slightly biased to the downside, but the Dow Jones leaning toward a bullish move in the presence of a double-bottom pattern

Wall Street recovered this past week as the Dow Jones outpaced the Nasdaq 100. The Canadian Dollar soared alongside crude oil prices. Bitcoin may see volatility as the White House revealed a push f…
Read more at : https://www.dailyfx.com/forex/fundamental/forecast/weekly/title/2021/10/10/Markets-Week-Ahead-Dow-Jones-Canadian-Dollar-Crude-Oil-BTCUSD-US-CPI-FOMC-Minutes.html