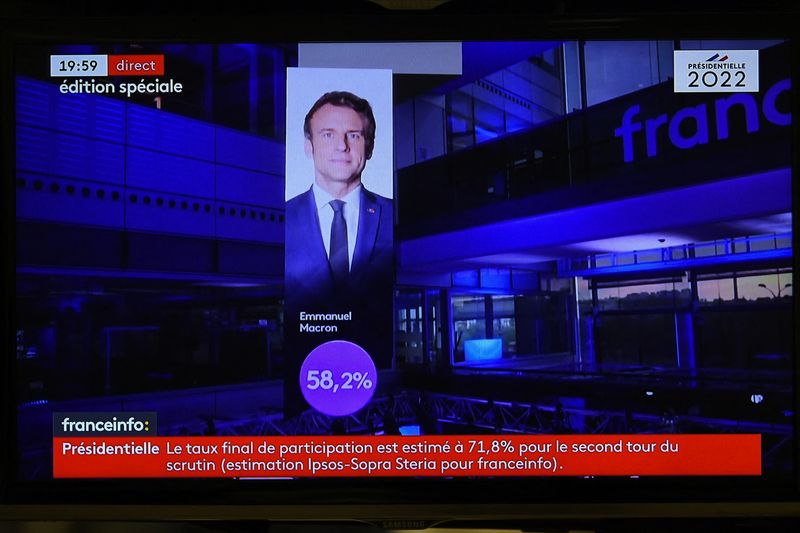 With 97% of votes counted, Macron was on course for 57.4% of the vote, interior ministry figures showed

Eurozone bond yields, particularly yields on French government debt are likely to dip later in the day on market relief about Macron’s win. Yields on benchmark 10-year debt which hit more than seven-year highs last week may dip by 5-7 bps in European trading on Monday.

A widely watched spread between French and German government bonds, a gauge for French political risks, is likely to tighten. It hit an April 2020 high of 54 bps earlier this month.

Here is a summary of analyst comments:

“We expect a modest bounce in EURUSD closer to 1.10 in the immediate aftermath of President Macron’s re-election. The euro’s medium-term recovery depends on ECB policy tightening catch-up with the Fed and other G10 central banks, which we expect to begin in earnest in H2.

“As for OAT-Bund spreads, we see a very modest market reaction as the market had already given up the risk premium following the round 1 vote and the debate on 20th April.”

“The euro has been dragged a bit lower against the dollar this morning because, with the French election out of the way, the market is starting to focus on other worries, like about Chinese growth. Stock markets are in the red this morning, and that risk aversion has generally benefited the dollar.”

“Victory will lead (Macron) to strengthen the Franco-German couple and more generally the European institutions … the absence of a change of course will reassure not only the other EU countries but also the NATO.

“But the increasing fragmentation of the political landscape makes it doubtful that Macron’s party has an absolute majority this time (in parliament).

“The recomposition of the French political landscape is not over. The majority that emerges from the parliamentary elections will be decisive for economic policy.”

“We believe Macron’s victory was expected by the market, so market implications are likely to be very limited. We could see some marginal spread tightening for French government bonds and marginal euro strengthening, but longer-term performance of both depends more on the European Central Bank decisions to come in the next several months.

“Domestically, Macron will continue to push for some moderate reforms and some spending restraints, albeit keeping fiscal policy relatively accommodative. Internationally, it is likely to see acceleration of sanctioning Russia.”

“The markets should be relieved on the Macron win. We should see a modest tightening in French and German bond yield spreads. French stocks should open marginally higher but the euro will be buffeted by the surge in dollar rates last week. The big news from Europe in the coming days is the growing likelihood of a Russian oil embargo.”

“Based on the exit polls we can’t say how big his margin will be, but the polls suggest a convincing win and that gives him momentum for the parliamentary elections.

“He has a chance of winning those elections and getting close to a majority, so he should be able to install a government that is friendly even it has to rely on support.

“For markets, this is probably only a modest sigh of relief as the latest opinion polls had already suggested a win for Macron. But what we can say is that we have been spared the nightmare scenario.”

“We had thought the markets were a bit complacent going into the elections and we had gone short on Italian debt as a result. While over the medium term there will be some pressure on peripheral bonds, the immediate market reaction will be one of relief on the Macron news.

“We could see OAT bond yields move 10 bps tighter and German bund-swaps spreads also narrow 5 bps. The euro should move a bit higher but in the medium term as the short term risk implication has ebbed. Macron now has some more time to put together more EU reforms namely on energy and more cohesiveness on key sectors such as energy and defence.”

“What we have learned form the last couple of years is that the polls are good but not completely reliable. So, we are likely to get a relief rally, there would have been such a big upset if Le Pen had won.

“On the economy, I think it is interesting as Macron cannot run again so his legacy will be set in the next five years. So, he is likely to push for more reforms as he won’t be standing in five years’ time. There is an opportunity for him to push his agenda, so perhaps he can be braver.

“The scale of the victory is likely to be lower than in 2017 but it is a convincing win for an incumbent.”

“There’s going to be a bit of relief. There has been a lot of trust in the polls, so I don’t expect a huge reaction but the alternative would have been a huge reaction across France and Europe too.

“For French stocks, we could see a small relief rally too. But after the knee jerk reaction, the focus will turn to the ECB and the rate outlook and that will be key driver for European stocks and bonds.”

“Macron’s victory is good news for Europe, as Macron is a big defender of European unity, the need for a unified EU foreign policy and defence, and is playing a key role in Europe’s diplomacy in the war in Ukraine.

“Le Pen’s election would have created a collision course with the EU and triggered a political crisis in France, and potentially in Europe, where she would have had few supporters, except Victor Orban.

“Yet, Macron’s victory should be read with caveats: Le Pen got her best score ever, and the level of abstention of young people is at more than 40%, so the distrust toward Macron’s governing is high.”

“Macron’s clear victory is likely to reassure the markets that the European dynamic will continue. In the short term, the main logical beneficiary of this election could be the euro, which was still flirting last Friday with two-year lows against the dollar. As the European equity market has rather outperformed the U.S. market in the last few days, there is not necessarily a reason to expect a massive outperformance of French or European equities against the U.S.

“The negative aspect for the markets of this rather comfortable election could however come from a quick decision in favour of a Russian oil embargo which would exacerbate inflationary pressures and economic slowdown (stagflation scenario) in Europe.”