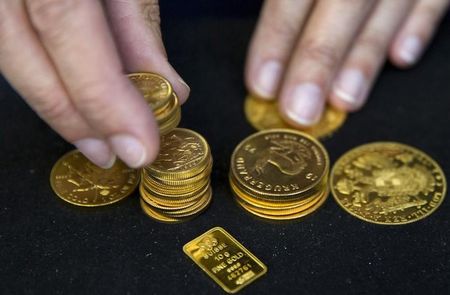 Investing.com – Gold was up on Thursday morning in Asia, sticking around an eight-week high thanks to a weaker dollar and falling U.S. Treasury yields.

A U.S. Senate committee on Wednesday backed a bill aimed at China and proposing closer scrutiny of overseas donations to U.S. colleges and universities among other measures. The passage of the bill, also aimed at bolstering U.S. competitiveness in the technology and critical manufacturing industries, also raised tensions between the two countries.

U.S. lawmakers also introduced a separate bill seeking billions to fund technology research, and the economy is widely expected to grow at its fastest annual pace in decades in 2021, although the recent rise in COVID-19 cases could slow that pace down. The number of COVID-19 cases globally exceeded the 143 million mark and over three million have died as of Apr. 22, according to Johns Hopkins University data.

Investors will be paying close attention to these decisions after the Bank of Canada signaled that it could start hiking interest rates in late 2022 after cutting the pace of bond purchases, making it the first central bank in the Group of Seven to progress towards withdrawing unprecedented stimulus measures.

In other precious metals, silver edged down 0.1% and platinum edged down 0.2%, while palladium inched up 0.1%.