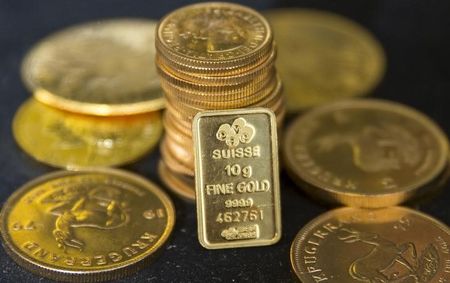 In the middle of the 35th week of 2022, gold lingered near 1-month low and was set for a fifth consecutive monthly drop. According to analysts and financial strategists this drop in the price of gold occurred because solid U.S. economic data and hawkish Federal Reserve (Fed) comments pointed to more interest rate increases, which have negatively affected the appeal of holding this precious metal.

On 31 August 2022, at 8:47 am CET, investment gold traded on the Commodities Exchange Centre (COMEX) commodity trades at US$ 1,733.20 per troy ounce, with a daily decrease of -0.18%. According to the technical analysis data, this price represents a total annual decrease of -4.72% over the last 52 weeks, from the beginning of this year this decrease already represents -5.91%. At the time mentioned, according to the US Dollar Currency Index (DXY) we saw the USD at a price level of 108.71 with a daily decrease of -0.06%. The global currency pair EUR/USD traded on the international foreign exchange – Forex market at US$ 1.002 per EUR with the daily strengthening of the EUR by +0.03% against the USD.

Investors and gold traders, according to economic reporters, are influenced by their concerns regarding the rising exchange value of the USD, whose further growth will most likely be supported by the continued increase in interest rates by the Fed. On 30 August, the chief of the New York Fed said the US central bank would probably need to get its policy rate “somewhat above” 3.5% and keep it there until the end of 2023. The current interest rate recently increased in July this year and it is now in the range of 2.25% to 2.50% p.a. The Federal Open Market Committee (FOMC) will decide at its meeting, which will traditionally take place over two days, from 20-21 September 2022 whether a third straight 75-basis-point rate hike next month or a smaller half-point hike happens.

According to economic reporters, in recent days influential American politicians in both Congress and the Senate have been speaking out in favor of raising interest rates, on both sides of the political spectrum, Republicans and Democrats. US job openings increased in July and data for the prior month was revised sharply higher. It points to persistently strong demand for labor, which gives the Fed cover to maintain its aggressive interest rate increases. In this context, even though gold is perceived as a hedge against inflation, rising rates increase the opportunity cost of holding precious metals and the interest in holding it decreases significantly. Its supply then exceeds demand and the price of gold falls. However, despite this current state and its outlook in the short-term investment horizon, for centuries gold has always maintained its value over the long-term.