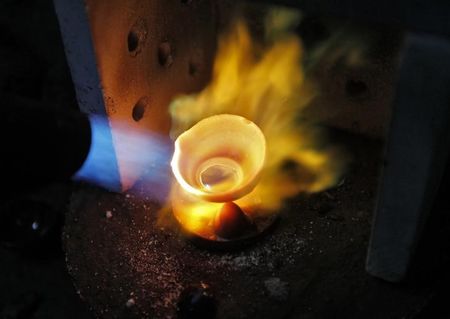 Investing.com – Gold was down on Thursday morning in Asia as investors await U.S. economic data to gauge inflationary pressures further. A strengthening dollar also put a dent in the yellow metal’s appeal.

Investors also digested the most recent comments from U.S. Federal Reserve officials. Dallas Fed President Robert Kaplan said that the economy will likely meet the Fed’s threshold for tapering earlier than expected, after previously predicting an interest rate hike in 2022, However, his counterpart in Atlanta, Raphael Bostic, said the Fed could slow down the process over the next few months.

The Fed has recently sought to calm investor concerns after handing down an unexpectedly hawkish policy decision during the previous week. Officials, including Fed Chairman Jerome Powell, stressed that the central bank would retain a loose monetary policy, but have added that a gradual withdrawal of emergency support could happen in the months ahead.

Although gold is widely viewed as a hedge against inflation, a Fed interest rate hike will increase the opportunity cost of holding it.

On the data front, the U.S. manufacturing purchasing managers’ index (PMI) was a better-than-expected 62.6 in June, while the services PMI was lower than expected at 64.8.

Further U.S. data, including core durable goods orders for May, the GDP for the first quarter and initial jobless claims for the week, will be released later in the day.

The Fed will also release the results from its latest bank stress tests later in the day.

Across the Atlantic, the Bank of England will also hand down its policy decision later in the day. Eurozone data said that manufacturing and services PMIs for June were a better-than-expected 63.1 and 58 respectively.

Germany’s manufacturing PMI for June was a better-than-expected 64.9 ahead of the release of the country’s Ifo Business Climate Index later in the day.

In the U.K., the manufacturing PMI was a better-than-expected 64.2, while the services PMI was lower than expected at 61.7.

Silver was steady at $25.87 per ounce in other precious metals, palladium inched down 0.1% and platinum gained 0.5%.