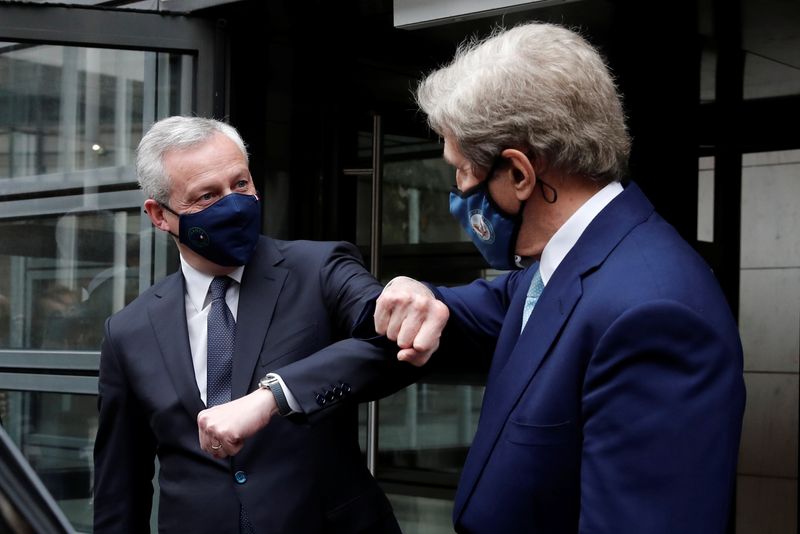 “That would be a source of considerable confusion between our two continents.”

Asked to respond to the separate suggestion of a carbon border adjustment tax, Kerry said Washington was aware that a number of countries were investigating such a tool.

“There are a number of different proposals to assign a price on carbon and the methane and the greenhouse gases creating this damage. Whether or not we think that’s the right tool or not, we have not yet been able to sit down and evaluate that,” Kerry said.

Former U.S. president Donald Trump pulled the world’s second-largest greenhouse gas emitter out of a 2015 global pact to fight climate change brokered in Paris. Hours after being sworn in in January, Biden used a presidential decree to sign back up.

Kerry said the world’s largest emitters of greenhouse gases were “not sufficiently on the road to meeting” the Paris accord’s target of limiting global warming to well below 2°C, preferably 1.5°C, above pre-industrial levels.

The special envoy said major economies needed to “make sure that the pathway to net-zero greenhouse gas emissions by 2050 remained a real option”. India, Japan, Russia and Brazil are also all under pressure to commit to faster emissions cuts.

“The president (Biden) has already set that goal. He believes that is the target,” Kerry said.

An estimated $2.5 trillion to $4 trillion would be needed over the next three decades to transition to an environmentally sustainable global economy, Kerry added.

Asked if he was disappointed that China had announced a new five-year plan that analysts say will see its emissions rise, Kerry said: “It’s not just about China. We all have to do this.”