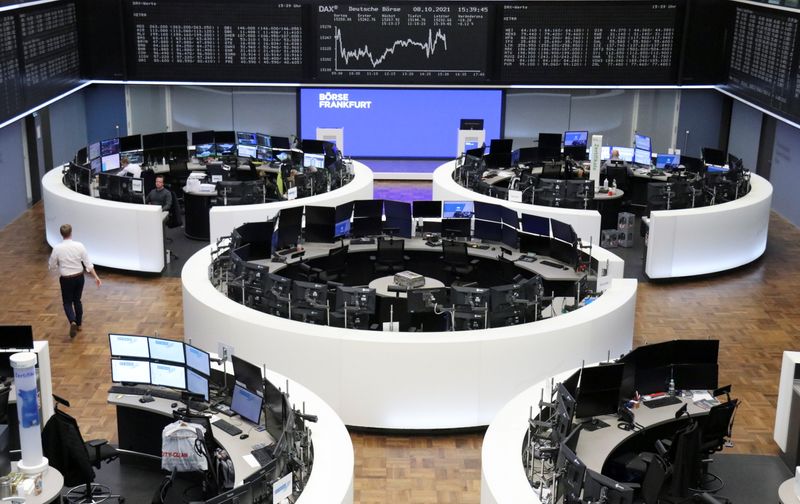 The pan-European STOXX 600 rose 0.3%, staying close to one-month highs. Utilities and industrials led gains, while German reinsurer Munich Re rose 2.6% after doubling its profit in the third quarter.

Telecom stocks followed, down 0.8% as Sweden’s Ericsson and Tele2 fell 3.7% and 4.3%, respectively, after earnings. Ericsson announced plans to reduce its operations in China after suffering a big sales drop in one of its biggest markets.

Third-quarter profits at European companies are expected to grow 47.6% from the same period in 2020, according to Refinitiv I/B/E/S data, with earnings revisions by analysts cooling recently but still remaining positive.

“It’s hard to see how further optimism about earnings would boost the market too much at this point just because of how much good news is already discounted in share prices,” said Thomas Mathews, markets economist at Capital Economics.

The STOXX 600 has gained almost 3% so far in October after a 3.4% drop in the previous month, as investors turned to riskier assets in expectation of a steady earnings season.

“With rates starting to rise and inflation picking up, the days of big, sustained rallies in the market are over, but we can expect to see European equities grinding higher for a while,” said Mathews.

Investors have been aggressively pricing in interest rate hikes, particularly in the UK, to offset a surge in energy prices and other bottlenecks driving general prices higher.

Gains in UK’s FTSE 100 were capped by British Airways owner IAG (LON:ICAG) after the UK aviation regulator said Britain’s biggest airport Heathrow will not be permitted to raise passenger charges by as much as it had wanted.[MET/L]

Drugmaker Roche fell 1.7%, after its partner Atea Pharma said their experimental COVID-19 antiviral pill failed to help patients with mild and moderate COVID-19 in a study.