The outlook for EUR/USD remains rosy after last week’s break above 1.20 for the first time since early last month but there could be a delay of a few days or more as the bulls realize their gains before reinstating long positions.

Overall, there is still demand for “risk-on” assets such as global equities – and less demand for safe havens like the US Dollar – as the world economy recovers from the slump caused by the coronavirus pandemic. However, news of record infections in India and further restrictions in Japan has reemphasized that there are still risks to the outlook and European Central Bank President Christine Lagarde was therefore predictably cautious at her press conference last week after the ECB left all its monetary policy settings unchanged as expected.

A further advance in EUR/USD is therefore by no means guaranteed, even though the EU vaccination program has picked up after a slow start and helped allay fears that economic growth in the EU will lag behind the growth of economies like the US and the UK. Still, the path of least resistance for the currency pair is upwards, particularly if the hawks on the ECB continue to press for a tightening of policy in the months ahead. 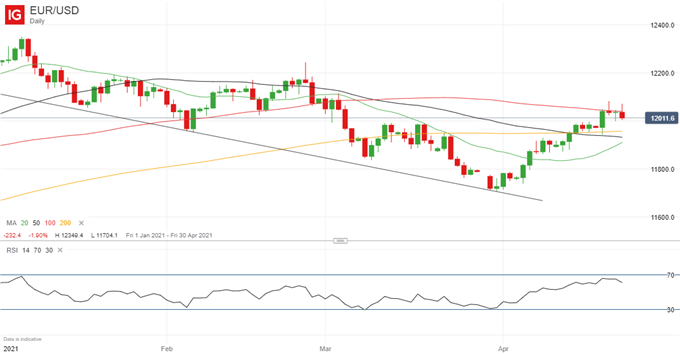 Turning to the economic calendar, the main event in the coming week will be Wednesday’s decision on US monetary policy by the Federal Open Market Committee, and that could certainly provide some direction for EUR/USD. The risk for EUR/USD bulls is principally that the Fed will be unexpectedly hawkish, giving USD a lift. However, the week is also packed with Eurozone data, starting with Monday’s Ifo index of German business conditions, expected to increase to 97.6 in April from 96.6 in March.

Most of the potentially market-moving numbers are released on Thursday and Friday, however – after the Fed has released its statement. These include unemployment and sentiment figures but it will be inflation and GDP data that attract most attention.

Analysts predict a rise in German inflation in April to 1.8% year/year from 1.7% the month before, and an increase in the Eurozone as a whole to 1.6% from 1.3%. Numbers like these would not raise concerns at the ECB, even among the hawks, but if they are substantially higher than predicted then the hawks will likely raise the alarm.

Friday’s “flash” first-quarter economic growth figures will likely have less of an impact. GDP data are generally seen as backward-looking so not market moving and that should be no different this time even given the current focus on growth. In Germany, an improvement to -3.2% year/year from the previous -3.7% is predicted.

Last week saw EUR/USD break above 1.20 for the first time since early March; now it will likely pause for breath before possibly strengthening further.
Read more at : https://www.dailyfx.com/forex/fundamental/forecast/weekly/eur/2021/04/25/Euro-Forecast-EURUSD-Outlook-Still-Constructive-After-Break-Above-120.html