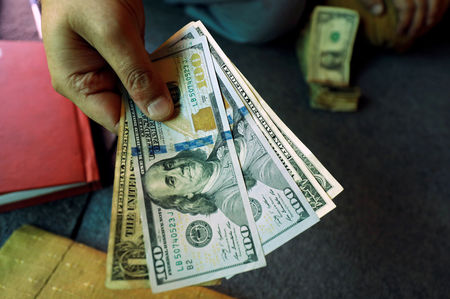 Investing.com – The dollar was up on Monday morning in Asia, hitting a two-and-a-half-year high versus the yen. Figures from the latest U.S. report did not alter market expectations that the U.S. Federal Reserve will begin asset tapering as soon as November 2021.

The U.S. jobs report was disappointing, with non-farm payrolls at 194,000 and the unemployment rate at 4.8% in September. With labor shortages still a possibility and fanning inflation concerns, the Fed is likely to begin asset tapering within 2021, as is widely expected.

U.S. bond yields climbed after the data’s release, with the benchmark 10-year Treasuries yield hitting a four-month high of 1.617%.

“Although the headline payroll figure was weak, when you look into details, the outlook remains solid and there isn’t anything that would prevent the Fed from tapering next month,” Barclays (LON:BARC) senior FX strategist Shinichiro Kadota

“The dollar/yen is now at the top end of its trading range, its 2019 peak of 112.40, so I do expect heavy selling there for now. Still, should it break that level, we could see the dollar rising to 113 or 114 handled quite easily,” he added.

The U.S. releases further data, including the consumer price index, on Wednesday. Should the data be higher than expected, expectations of an earlier interest rate hike after asset tapering could bring further gains for the U.S. currency, according to analysts.

Meanwhile, the Bank of England also signaled that it could also hike its interest rates. The pound extended its recovery from August’s nine-month low over the news.