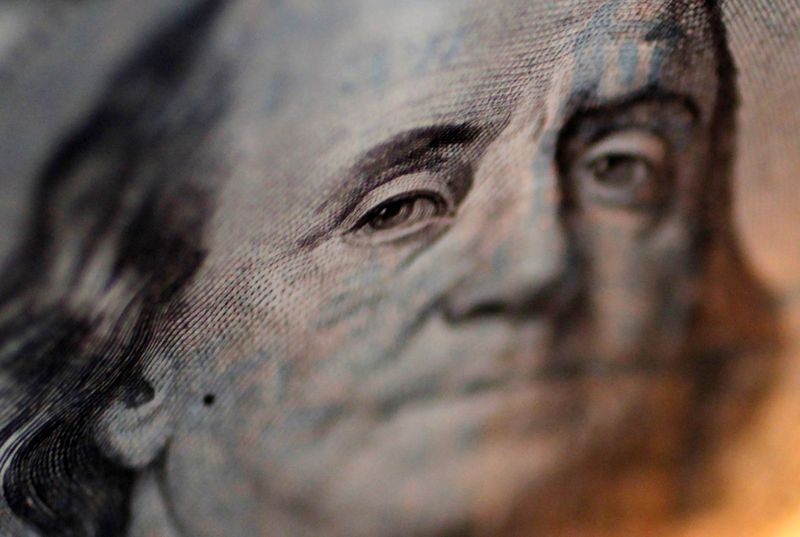 LONDON (Reuters) – The dollar levelled out after its recent bounce on Monday as investors made a cautious start to a week crammed with central bank meetings and big-ticket U.S. economic data, waiting for clues on the global inflation outlook and policymakers’ responses.

Trade was thinned by holidays in Japan, China and Britain, which kept a lid on volatility, leaving the greenback to trade where it settled after a Friday leap. It held at $1.2040 per euro and crept to a three-week high of 109.66 yen.

The dollar index, measured against six major currencies, held at 91.210.

The index dropped 2% through April as a positive view of global recovery prospects lifted trade-exposed currencies at the dollar’s expense, but bounced with upbeat U.S. consumption data on Friday.

“We remain bearish USD linked to peak US exceptionalism, and a broadening global recovery elsewhere,” said CitiFX analysts Ebrahim Rahbari and Calvin Tse in a note to clients.

“We attribute the USD rebound late last week in part to noise around month-end flows, but note the risk for higher US rates to change the FX trajectory. Meanwhile, BRL and CAD remain among the favourites, while JPY was held back by rising rates, and several EMs by idiosyncratic headwinds.”

The Australian and New Zealand dollars were marginally firmer on Monday, though not enough to recoup a dip suffered on Friday. [AUD/]

The South Korean won hit a one-week low after North Korea vowed it would respond to what it regards as hostile U.S. policy, while pressure for a national lockdown in India pushed the rupee a little lower.

Purchasing Managers Index figures for manufacturers were positive in Asia and Europe on Monday and those due later are expected to show growth picking up speed in the United States. However the week’s major focus will be on U.S. manufacturing surveys due Wednesday and April labour market numbers on Friday.

Forecasts are that 978,000 jobs were created in the month. However analysts say the market response to a surprise either way may be hard to guess, as investors have begun to fret that strong data may prompt central bankers to taper their support.

“The risk is for a hotter number,” said Chris Weston, head of research at broker Pepperstone in Melbourne.

“But will good numbers lead to a broad risk-off vibe, as traders’ price in higher rate expectations, and the dollar rallies,” he added. “I suspect we’re getting to a point where really good data could start to become bad for markets.”

Dallas Fed President Robert Kaplan caused a stir on Friday by calling for beginning the conversation about tapering, although Federal Reserve Chair Jerome Powell has been clear that he is likely to be patient.

Powell is due to speak later on Monday and will be followed by a raft of Fed officials this week. Central bank policy meetings are also scheduled this week in Australia, Britain and Norway.

In Australia, no policy changes are expected on Tuesday although traders will look to a speech by deputy Reserve Bank of Australia governor Guy Debelle on Thursday for insight into the bank’s thinking around its bond purchases outlook.

Asset purchases are likewise the focus when the Bank of England meets on Thursday, as well as perhaps an upgrade of its economic outlook, while Norges Bank – which projects hiking rates this year – is expected to stick with its hawkish tone.