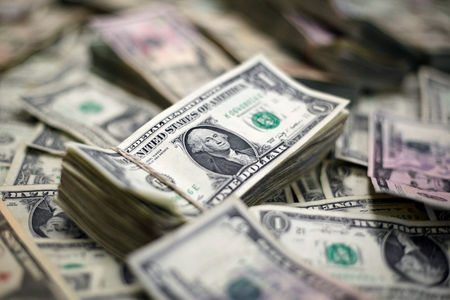 The greenback has closely tracked a surge in Treasury yields in recent weeks, with higher yields boosting the currency’s appeal as well as shaking overall investor confidence, spurring demand for the safest assets.

The benchmark 10-year Treasury yield  stabilized around 1.54% on Wednesday after a three-day drop from a one-year high of 1.6250%.

Helping this calming was the successful auction on Tuesday of $58 billion in U.S. three-year notes. Weak demand at an auction of seven-year notes in late February helped start the trend of higher yields.

Investors are now looking at Wednesday’s auction of $38 billion in 10-year notes to see if this can also be absorbed successfully. And there will be plenty more of these in the months to come with President Joe Biden’s $1.9 trillion fiscal package to be funded.

Also on Wednesday’s slate is the release of February U.S. inflation data, with CPI expected to rise 0.4% on the month, up 1.7% on the year.

Speaking of inflation, February inflation in Norway rose to 3.3%, while core inflation stood at 2.7 % on the year, higher than the country’s central bank predicted.

“Core inflation is not most important for Norges Bank now, as developments in the real economy matter most,” said analysts at Nordea Bank, in a research note, but “overall, these figures pull in the direction of a slightly higher rate path in March.”