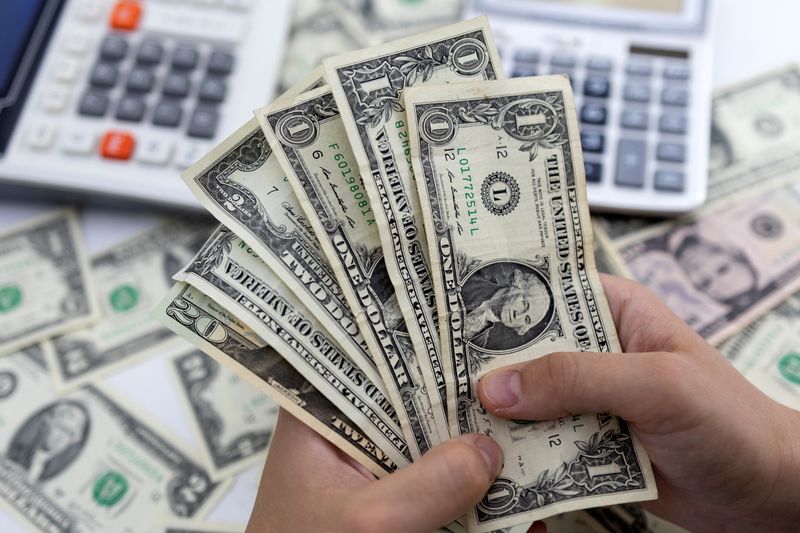 LONDON (Reuters) – The dollar consolidated near a two-decade high on Friday as traders flirted with the prospect of a 100 basis point rate hike by the Federal Reserve later this month, while the euro was pinned near parity.

Currencies perceived as riskier, including the Aussie and the pound, were under pressure as a barrage of negative news over the last 24 hours weighed on sentiment.

Against a basket of its rivals, the dollar rose to its highest levels since September 2002 above 109 before edging back to trade at 108.3, down 0.2% on the day.

The U.S. banking earnings season kicked off on a weak note, China’s growth in the second quarter tanked more than expected, Italy faced a new political crisis and Fed officials signalled no let up on their hawkish policy stance.

“With U.S. rate hikes potentially accelerating and the ECB stuck in neutral amid a sharp European economic slowdown, the market has not yet given up the idea of a break lower towards the next key support level around 0.96,” said John Hardy, head of FX strategy at Saxo Bank.

The greenback was on track for its third consecutive week of gains as traders ramped up bets the Fed would go for a super-sized tightening at its July 26-27 meeting after data on Wednesday showed U.S. consumer price inflation racing at the fastest pace in four decades.

Those bets were pared after Fed Governor Christopher Waller and St. Louis Fed President James Bullard both said they favoured another 75 basis point hike for this month, in spite of the inflation figures.

The euro edged higher to $1.0053, after bouncing back from below parity on Thursday for a second day.

The single currency dipped as low as $0.9952 after Italian Prime Minister Mario Draghi offered to resign, but that was rejected by the country’s president.

China’s yuan held at a two-month low against the dollar and looked set for its biggest weekly drop since May as the weak data raised doubts about this year’s economic growth target.

“A stabilisation in the dollar around current levels is possible today, but we continue to highlight: a) limited scope for a correction; b) a balance of risks still tilted to the upside in the near term,” ING analysts said in a note.