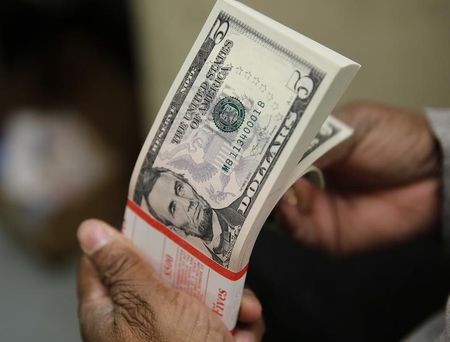 Investing.com – The dollar climbed in early European trading Wednesday, nearing a four-month high as worries about a third Covid wave and potential tax hikes prompted traders to seek out the safe haven.

“The sharp fall in CPI inflation in February reflected clothing retailers slashing prices, because the lockdown has left them with excess stock. Prices will snap back, as they have after previous lockdowns. No reason to doubt that CPI inflation will be c.2% by end year,” said analyst Samuel Tombs at Pantheon Macroeconomics.

EUR/USD fell 0.2% to 1.1824, falling to a four-month low, after the Netherlands joined the likes of Germany, France and Italy in extending its lockdown following a sharp pickup in Covid-19 cases, threatening to overwhelm its hospitals.

Adding to the concerns, a U.S. health agency said Tuesday the AstraZeneca (NASDAQ:AZN) vaccine may have included outdated information in its trial data.

This vaccine has had a troubled history, with a number of European countries suspending its use last week over reports of blood clots from a small number of its recipients. It was cleared late last week by the European regulator, but confidence in its efficacy has been shaken, and this news will hardly help, particularly given the slow rollout of vaccines in the region.

“Europe’s handling of the Covid-19 crisis certainly seems to be taking its toll on the EUR. Third waves now look a reality for the likes of France, the Netherlands and Italy, triggering fresh lockdowns and delaying the day when Europe can play its part in the global recovery,” said analysts at ING, in a research note.

The greenback was also supported by comments from Treasury Secretary Janet Yellen to the House Financial Services Committee on Tuesday indicating that tax rises may be on their way.

Yellen was asked about the impact of corporate tax hikes on prices and consumers, and replied that existing studies are “very unclear”, but added the funds raised from taxes would help fund the government’s spending plan, including an infrastructure package.

Both Yellen and Federal Reserve Chairman Jerome Powell are scheduled to testify to the Senate Banking Panel on Wednesday.

“The USD should be rising 20% in YoY terms instead of falling 15% according to relative growth expectations,” said analysts at Nordea, in a research note.

Elsewhere, USD/CNY rose 0.1% to 6.5248, amid escalating tensions between the West and China, after human rights sanctions on China imposed by the United States, Europe and Britain prompted retaliatory sanctions from Beijing.

USD/TRY rose 1% to 8.0164 as the lira continues to suffer from the decision of Turkish President Recep Tayyip Erdogan to fire his hawkish central bank chief, Naci Agbul at the weekend.