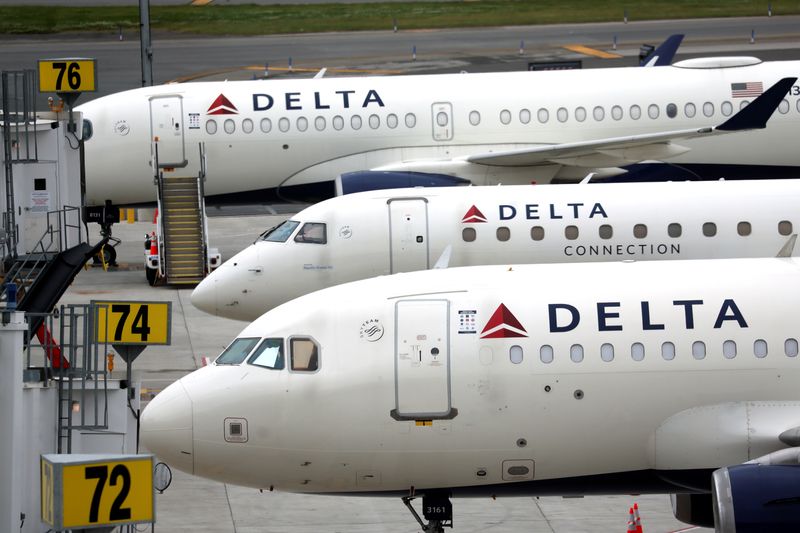 CHICAGO (Reuters) – Delta Air Lines Inc (NYSE:DAL) on Wednesday forecast a “meaningful” profit for the full-year as robust travel demand helped it post its strongest quarterly earnings since the start of the pandemic.

The Atlanta-based carrier expects a solid profit in the third quarter as well, with operating margin estimated to be in the range of 11%-13%. The No 3. U.S. airline by fleet size said there is no evidence of a pullback in consumer demand.

It reported an adjusted profit of $1.44 per share for the second quarter. That was below analysts’ expectations of $1.73 per share, according to Refinitiv, yet still marked the carrier’s best performance since 2019.

Revenue for the quarter through June came in at $13.8 billion, topping Wall Street estimates.

“This is an industry that hasn’t seen demand in a material way for two years, and so we have a lot of consumers with a tremendous urge and desire to travel,” Chief Executive Ed Bastian said in an interview.

American carriers are enjoying the strongest summer travel season in three years as more people resume regular activities including vacations, and the lifting of pandemic travel restrictions has sent bookings soaring. International traffic is on a rebound, while office reopenings are fueling corporate travel demand.

U.S. passenger traffic is up 18% this summer from a year ago and has been averaging about 89% of the pre-pandemic levels since the Memorial Day holiday weekend in May, according to Transportation Security Administration data, making for a profitable second-quarter for most of the major carriers despite inflationary pressure.

Rival American Airlines (NASDAQ:AAL) on Tuesday forecast its first quarterly profit since the onset of the pandemic.

The NYSE Arca Airline index has fallen 22% since early May on concerns that higher air fares, a worsening economic outlook, persistently high inflation and rising interest rates could dent travel spending in the second half of the year.

“The demand is going to continue to hold fairly well through the fall and into the winter,” Bastian said.

The company expects third-quarter revenue to be up as much as 5% from 2019, even as its capacity is projected to be down 15%-17%. Non fuel operating expense for the quarter is estimated to be 22% above the 2019 level.

Delta said restoring operational reliability is its top priority. The carrier’s performance in recent weeks has been marred by flight delays and cancellations caused by staffing gaps, weather and air traffic control constraints.

The company said its performance in July, however, is off to a good start. To ease a staffing crunch, the airline has deployed hundreds of employees from its corporate offices at airports in Atlanta and New York to assist with check-in and baggage drop-off.