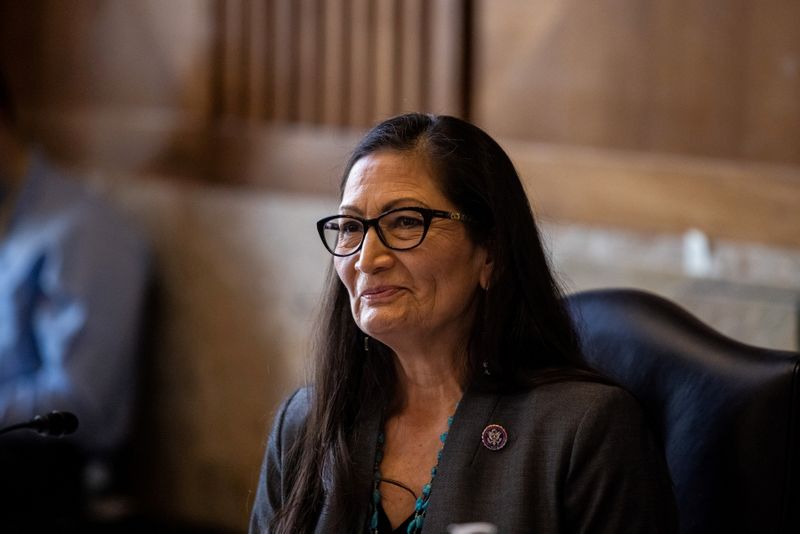 WASHINGTON (Reuters) – U.S. Representative Deb Haaland was confirmed on Monday as Secretary of the Interior, becoming the first Native American to lead a cabinet agency and securing a central role in President Joe Biden’s sweeping plans to fight climate change.

Haaland became one of the first two Native American women elected to Congress in 2018. Her ascension to the cabinet followed weeks of campaigning by Native American tribes and environmental groups in support of her historic appointment. She faced resistance from Republican lawmakers who grilled her at a two-day hearing last month about her involvement in pipeline protests, her support of the Green New Deal climate resolution, and the Biden administration’s pause on new federal drilling leases.

Haaland will oversee polices guiding use of 500 million acres of federal and tribal land, a fifth of the nation’s surface. A member of the Laguna Pueblo tribe, Haaland will also oversee the U.S. government’s relationship with some 574 federally recognized tribal nations.

“She’s the embodiment of the old adage that if you see it you can be it,” he said.

In interviews, two young Native Americans said they hoped Haaland’s appointment will prompt the federal government to consult more with tribes over issues ranging from environmental protection to policing.

“To me these environmental issues are entangled with tribal sovereignty. Under her direction I think there is a potential for addressing environmental racism,” said Majerle Lister, 26, a Diné graduate student living in Shiprock, New Mexico.

For New Mexico university student and community organizer Alysia Coriz, a 24-year old Kewa Pueblo, Haaland’s rise is a reminder of challenges Native women face within their own communities.

“In order for our Pueblo women to rise to their potential and exceed it, they have to look outside… I see Deb Haaland as an example,” said Coriz.

“Given the long and troubled relationship between the federal government and tribal nations, the ascension of Rep. Haaland to the top of the Interior Department is a profoundly important moment for America,” Schumer said before the vote.

Megan Hill, a citizen of the Oneida Nation of Wisconsin and director of Harvard’s Project on American Indian Economic Development, said Haaland must now juggle many competing demands, facing huge expectations due to the historic nature of her appointment.

“While she will have Cabinet-level decision-making power, she will face competing interests from protecting the environment and elevating Indigenous priorities to managing demands from big oil and climate change deniers,” she said.

Even before her confirmation, the Interior Department has been moving swiftly to reverse deregulatory actions of the former Trump administration, such as rollbacks of the Migratory Bird Treaty.

Last week, Interior said it will launch its review of the federal oil and gas leasing program on March 25, helping determine whether the Biden administration will permanently halt new leases on federal land and water.

Ahead of her confirmation, Haaland pledged to “be fierce” for all Americans, vowing to advance policies to tackle greenhouse gas emissions; some 25% of emissions come from burning fuels extracted from public lands and waters.

She told Reuters in November https://www.reuters.com/article/us-usa-interior-haaland/top-u-s-interior-department-contender-eyes-renewable-energy-expansion-on-public-land-idUSKBN27W213 she wants to speed up renewable energy projects, conserve 30% of public lands and waters by 2030 and protect more cultural and ecologically sensitive sites.