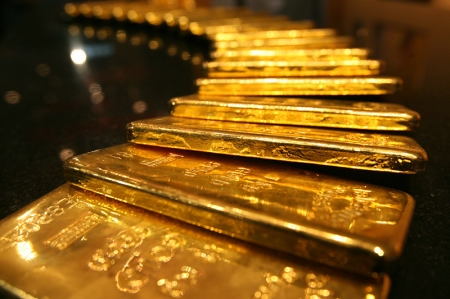 Investing.com – The dollar is retreating and battered stocks are coming back with a vengeance, but none of that is doing a thing for gold, which continued with its stately march to its lost drummer on Thursday.

Gold has been lifeless and largely directionless the past few days, despite President Biden’s push for his $1.9 trillion stimulus, Federal Reserve Chair Jay Powell ruling out any tapering in easing measures anytime soon and stocks on Wall Street coming back violently on Thursday, just after crashing a day ago.

The Dollar Index, which pits the greenback against a basket of six currencies, was, meanwhile, down 0.3%, giving back all of the previous day’s advance. That, at least, should have been supportive to gold.

The S&P 500, a barometer for the top 500 U.S. stocks, rose 1.9%, regaining almost all of Wednesday’s tumble. Once a contrarian trade to gold, the inverse relationship between equities and the yellow metal is barely visible these days, with each doing its own thing.

The only logical trigger for gold’s continuous decline on Thursday could be bond yields, as the benchmark U.S. 10-year Treasury note rose 5% for its first jump in four days.

TD Securities, breaking out gold in a commentary, tried to put a plausible spin on what was happening with everyone’s favorite safe-haven and inflation hedge after the Fed’s signal this week that easing measures weren’t going away anytime soon.

“While Powell noting that the economy is a ‘long way’ from the Fed’s goals and that talk of tapering is ‘premature’, should remove some concerns for gold bugs, our rates strategists suggest that supply concerns should continue to drive a bear steepening of the curve,” the Canadian bank-backed brokerage said.

“For gold bugs, our Global Macro PCA model suggests that gold prices are increasingly building in a discount relative to other markets related to the reflation theme, but we argue that the yellow metal’s discount is attributable to its trading regime,” the TD note added. “Indeed, gold is now trading more as a safe-haven asset rather than an inflation-hedge asset, which argues for lackluster investment flows for the time being. In this context, the bulls are increasingly relying on slumping Treasury yields, rather than rising inflation expectations, to fuel lower real rates.”