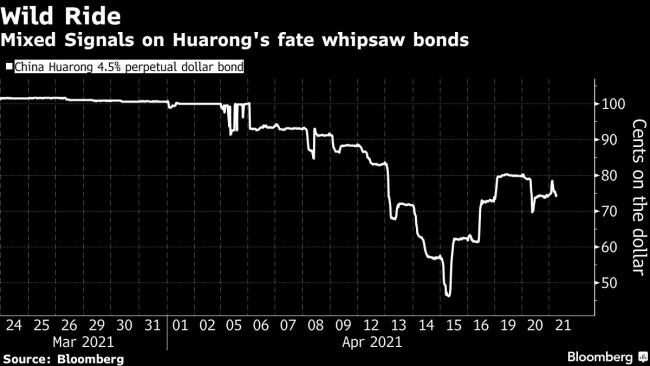 (Bloomberg) — China is considering a plan that would see the central bank assume more than 100 billion yuan ($15 billion) of assets from China Huarong Asset Management Co., helping the state-owned company clean up its balance sheet and refocus on its core business of managing distressed debt, people familiar with the matter said.

Under a proposal that’s still being finalized and could change, a unit of the People’s Bank of China would assume assets from some of Huarong’s unprofitable operations, the people said, asking not to identified as the discussions are private. Further details on how the arrangement would work couldn’t immediately be learned.

Bloomberg has previously reported that Huarong proposed an overhaul plan to Chinese regulators that would involve offloading its money-losing, non-core businesses.

If the PBOC proposal comes to fruition, it would mark a significant show of government support for a company that has faced intense investor scrutiny after missing a deadline to report earnings at the end of March. Speculation about a looming debt restructuring sent Huarong’s dollar bonds to record lows last week, stoking fears of market contagion and prompting some investors to reconsider assumptions about implicit government guarantees that have underpinned China’s credit market for decades. Huarong’s bonds have swung wildly in recent days amid conflicting signals about the company’s fate.

While the China Banking and Insurance Regulatory Commission said last week that Huarong was operating normally and had ample liquidity, authorities have remained quiet about whether the government will offer any financial support. It’s unclear whether Chinese regulators have given Huarong any specific guidance related to its offshore bonds.

“The news suggests that the central government is examining options to provide bail-out solutions to Huarong,” said Dan Wang, an analyst at Bloomberg Intelligence in Hong Kong. “The potential involvement of the PBOC, which is experienced in handling distressed financial institutions, also gives the market more hope that the Huarong saga will be dealt with in an orderly way that is less likely to incur losses for offshore bondholders.”

With nearly 1.6 trillion yuan of liabilities and a vast web of connections with other financial institutions, Huarong is among China’s most systemically important companies outside the nation’s state-owned banks. It’s also majority-owned by China’s finance ministry, making it a closely watched barometer of the government’s willingness to backstop debt of troubled state-owned enterprises.

Policy makers have been trying to dial back support for unprofitable SOEs to reduce moral hazard in recent years, but they’ve yet to allow a default by a company controlled by the central government. While Chinese SOEs reneged on a record 79.5 billion yuan of local bonds in 2020, most of the defaulters were linked to regional governments and none were considered as systemically important as Huarong.

Worries about the company’s fate have been most acute among offshore bondholders, in part because most of Huarong’s dollar debt contains a form of credit protection called a keepwell agreement that has yet to be fully tested in court. It’s unclear whether Huarong would be compelled to make good on more than $20 billion in dollar bonds if its offshore units — especially China Huarong International — were unable to repay.

The plan being discussed for Huarong has some similarities with the one enacted for troubled Chinese lender Bank of Jinzhou Co. in 2020. Two state-run entities, including one backed by the PBOC, injected 12.1 billion yuan of capital into the bank and assumed 150 billion of its distressed assets. The support package was widely viewed as an attempt to minimize ripple effects on the financial system, after authorities jolted markets in 2019 by seizing control of Baoshang Bank Co. and forcing some corporate creditors to take haircuts.

Among the other Huarong measures under consideration by regulators is the transfer of the Chinese government’s stake from the finance ministry to a unit of the nation’s sovereign wealth fund that has more experience resolving debt risks, a person familiar with the matter said in mid-April. Regulators have held several meetings to discuss Huarong’s fate, people familiar have said.

The PBOC plan is the latest development in a saga that has enthralled China watchers since 2018, when Huarong’s then-chairman Lai Xiaomin was accused of bribery in one of the country’s biggest-ever financial scandals. Under Lai, who was executed earlier this year, Huarong moved far beyond its original mandate of helping banks dispose of bad debt. The company raised billions of dollars from offshore bondholders and expanded into everything from trust companies to securities trading and illiquid investments.

Despite Huarong’s history of mismanagement, some market observers have said the costs of allowing the company to suffer a major default probably outweigh the benefits.

“We see little for the government to gain in letting such a major crisis happen in an effort to eliminate moral hazard in SOEs,” Citigroup Inc (NYSE:C). analysts including Eric Ollom wrote in a recent research report. “A financial crisis would likely result in a return to substantial monetary stimulus to counter any financial instability. The more likely policy outcome seems to be to remind investors of these risks but keep the fallout well contained.”