In this edition of Central Bank Watch, we’re examining the rates markets around the Bank of Canada, Reserve Bank of Australia, and Reserve Bank of New Zealand. While the RBNZ has already blinked and backed away from tightening measures until at least October, it appears that the RBA and BOC having been facing down similar decisions. True, the RBA did just announce an alteration to its QE program – more on that shortly. For the BOC, which has its September policy meeting on the immediate horizon, a test of its commitment to stimulus withdrawal is on deck.

RECOMMENDED BY CHRISTOPHER VECCHIO, CFA
Introduction to Forex News Trading
Get My Guide

Now that the Canadian federal election has passed, and with inflation rates running above expectations, it seems likely that the Bank of Canada will soon restart its stimulus withdrawal efforts as soon as it meets in October. Currently, asset purchases are running at a rate of C$2 billion per week. And now that energy prices are surging – energy accounts for approximately 11% of Canadian GDP – there is reason to believe there is less slack in the economy than previously anticipated. 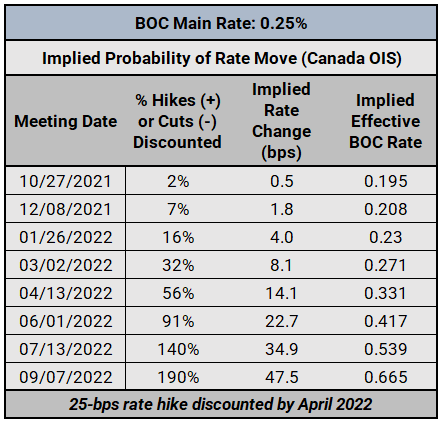 While a rate hike is still several months away, it does appear that a restart of stimulus withdrawal efforts have spurred some speculation that the BOC will act sooner than previously anticipated when the time to raise rates arrives. In early-September, there was a 59% chance of a 25-bps rate hike by June 2022. Now, on the last day of September, April is favored for the first 25-bps rate hike, with Canada overnight index swaps pricing in a 56% probability. 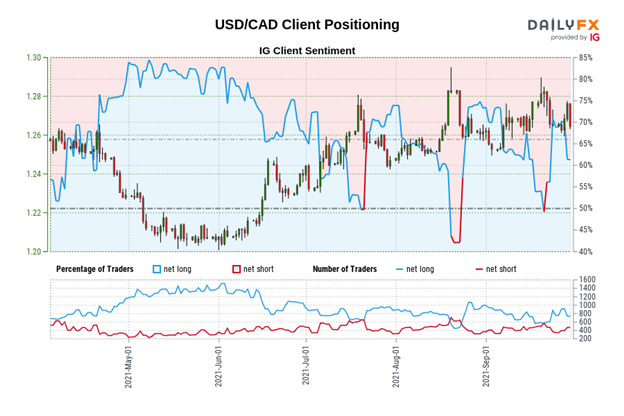 We typically take a contrarian view to crowd sentiment, and the fact traders are net-long suggests USD/CAD prices may continue to fall.

Yet traders are less net-long than yesterday and compared with last week. Recent changes in sentiment warn that the current USD/CAD price trend may soon reverse higher despite the fact traders remain net-long.

The September Reserve Bank of Australia meeting produced a reduction in asset purchases A$3 billion per week but would also extend its QE program from November 2021 until February 2022. As trade tensions persist with China, its largest trading partner, and with Chinese property sector concerns plaguing industrial base metals, markets are assuming that the RBA will slow walk any further stimulus withdrawal efforts in the near-term.

Rate hike odds have eased back for both the RBA and RBNZ ahead of the their October meetings next week.
Read more at : https://www.dailyfx.com/forex/fundamental/central_bank_watch/2021/09/30/central-bank-watch-boc-rba-rbnz-interest-rate-expectations-update-september-30.html