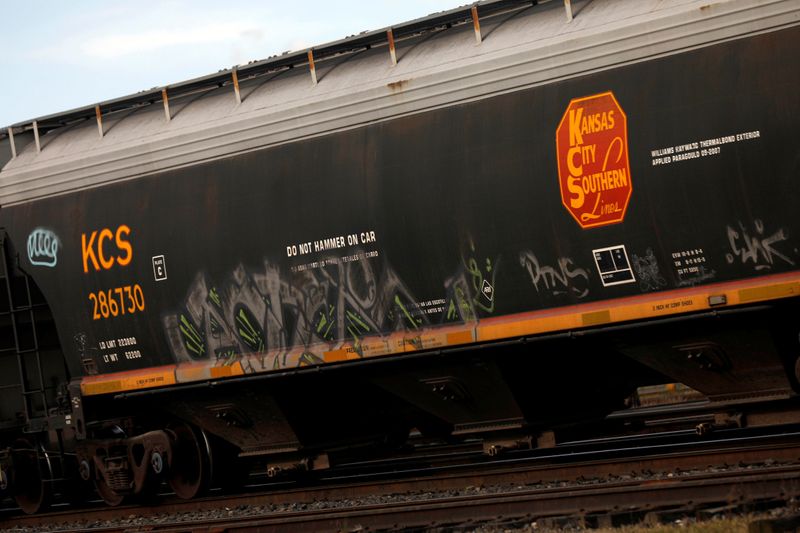 (Reuters) – Canadian Pacific (NYSE:CP) Railway Ltd on Sunday said it has agreed to buy Kansas City Southern (NYSE:KSU) for $25 billion in a cash-and-shares deal to create the first rail network connecting the United States, Mexico, and Canada, betting on a pick-up in North American trade.

Shareholders of Kansas City Southern will receive 0.489 of a Canadian Pacific share and $90 in cash for each KCS common share held, the companies said in a joint statement. The deal, which has an enterprise value of $29 billion including debt, values Kansas City Southern at $275 per share, representing a 23% premium to Friday’s closing price of $224.16.

The transaction is the biggest M&A launched in 2021.

“The new competition we will inject into the North American transportation market cannot happen soon enough, as the new USMCA Trade Agreement among these three countries makes the efficient integration of the continent’s supply chains more important than ever before,” Canadian Pacific Chief Executive Keith Creel said in the statement.

“This will create the first U.S.-Mexico-Canada railroad.”

The new and modernized U.S.-Mexico-Canada trade pact took effect in July last year, replacing the earlier deal that lasted 26 years, and is expected to further foster manufacturing and agriculture trade activities among the three countries.

Kansas City Southern’s board has approved the bid and the two companies have notified the U.S. Surface Transportation Board to seek the agency’s required approval. Canadian railroad operators’ attempts to buy U.S. rail companies have met limited success because of antitrust concerns.

Creel will continue to serve as CEO of the combined company, which will be headquartered in Calgary, the statement said.

The deal comes amid expectations of a pick-up in U.S.-Mexico trade after Joe Biden replaced Donald Trump as U.S. president.

The companies also highlighted the environmental benefits of the deal, saying the new single-line routes that would be created by the combination are expected to shift trucks off crowded U.S. highways, and cut emissions.

Rail is four times more fuel efficient than trucking, and one train can keep more than 300 trucks off public roads and produce 75% less greenhouse gas emissions, the companies said in a joint statement.

Shareholders in Kansas City Southern are expected to own 25% of Canadian Pacific’s outstanding common shares after the deal, the companies said.

Canadian Pacific said it will issue 44.5 million new shares and raise about $8.6 billion in debt to fund the transaction.

The Financial Times first reported on the deal.

Calgary-based Canadian Pacific is Canada’s No. 2 railroad operator, behind Canadian National Railway Co Ltd, with a market value of $50.6 billion.

It owns and operates a transcontinental freight railway in Canada and the United States. Grain haulage is the company’s biggest revenue driver, accounting for about 58% of bulk revenue and about 24% of total freight revenue in 2020.

Kansas City Southern has domestic and international rail operations in North America, focused on the north-south freight corridor connecting commercial and industrial markets in the central United States with industrial cities in Mexico.