GBP/USD reached its highest level since April 2018 Tuesday and will likely strengthen further, although a near-term period of consolidation first cannot be ruled out. The UK currency is benefiting from a likely easing of coronavirus restrictions in England on June 21, some positive economic data and hawkish comments from Bank of England rate-setters.

Note, though, that the planned ending of lockdown on June 21 is increasingly in doubt and if it is cancelled, even partially, that could provide the catalyst for profit-taking. Still, as the weekly chart below shows, GBP/USD remains in the uptrend that has been in place since September last year and GBP was the best-performing G10 currency last month, according to Reuters. 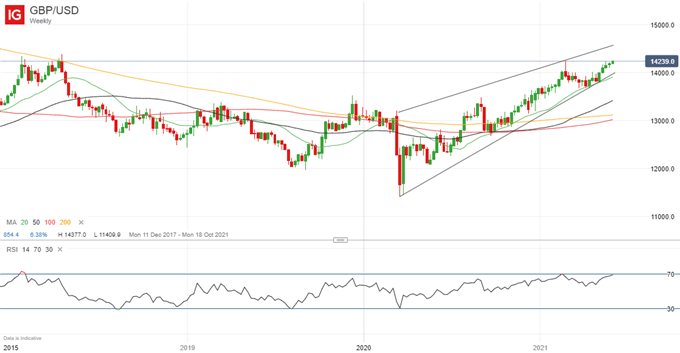 On the data front, figures released Tuesday showed the Nationwide house-price index up 10.9% year/year in May, stronger than both the previous 7.1% and the forecast 9.2%. Bank of England Deputy Governor Dave Ramsden said in an interview that the BoE is carefully monitoring the UK housing market for signs of a sustained period of inflation.

That follows a prediction from the OECD think tank that the UK economy will likely grow by 7.2% this year, up from its March prediction of 5.1%.

As for interest rates, BoE policymaker Gertjan Vlieghe warned last week that the BoE could raise UK interest rates as soon as the first half of next year if the jobs market bounces back faster than expected. This session, BoE Governor Andrew Bailey is due to speak at a conference but as the meeting is on “global responsible business” he is not likely to move the markets.

Sterling ‘s strong rally that has taken it to its highest level since April 2018 shows no sign of running out of steam just yet, although there could be some consolidation first.
Read more at : https://www.dailyfx.com/forex/market_alert/2021/06/01/British-Pound-GBP-Price-Outlook-GBPUSD-Still-Firm-After-Touching-Three-Year-High-MSE.html