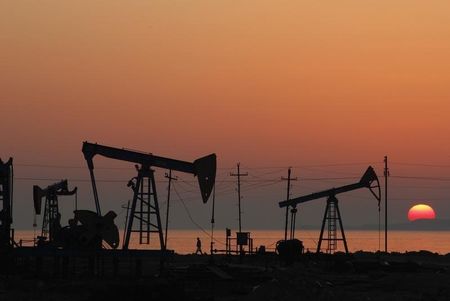 SINGAPORE (Reuters) -Russian oil is expected to come to Asia and the Middle East, while refined fuel produced in these regions will flow to the West as the global oil trade is disrupted by sanctions, Vitol’s Chief Executive Officer Russell Hardy said on Monday.

The Russia-Ukraine war has made energy security the top issues for governments as they grapple with inflation, and with bans on Russian oil looming and Moscow slashing gas supplies to Europe, policymakers are setting aside sustainability concerns for now.

More than a million barrels per day of U.S. crude is expected to go to Europe to fill the gap in Russian supplies, he told a forum at the 38th Annual Asia Pacific Petroleum Conference (APPEC) 2022 conference, adding that Russian commodities would need to find a home in places outside the United Kingdom, United States and European Union.

“It’s going to go further and longer distances and find different markets, and in doing that it’s going to have to trade at a discount,” Hardy said.

“You’re beginning to see that with fuel coming East that would otherwise have stayed in Europe, and fuel in the East going to the West to cover the shortfall.”

The EU is set to ban Russian crude oil from December in a move to strip the Kremlin of revenue, following Moscow’s invasion of Ukraine.

Russian crude oil imports into the EU and UK last fell to 1.7 million barrels per day (bpd) in August from 2.6 million bpd in January, according to data from the IEA, though the EU was still the biggest market for Russian crude.

The IEA also forecasted that the United States could soon overtake Russia as the main crude supplier to the EU and the UK combined.

“We’re going to need more supply but the slots are more important at the moment because the need is immediate,” Hardy said.

Brent crude futures eased in recent weeks on worries that recession would reduce demand but are expected to hit $100 again on tight supplies when the European Union sanctions on Russian oil are implemented in December and February.