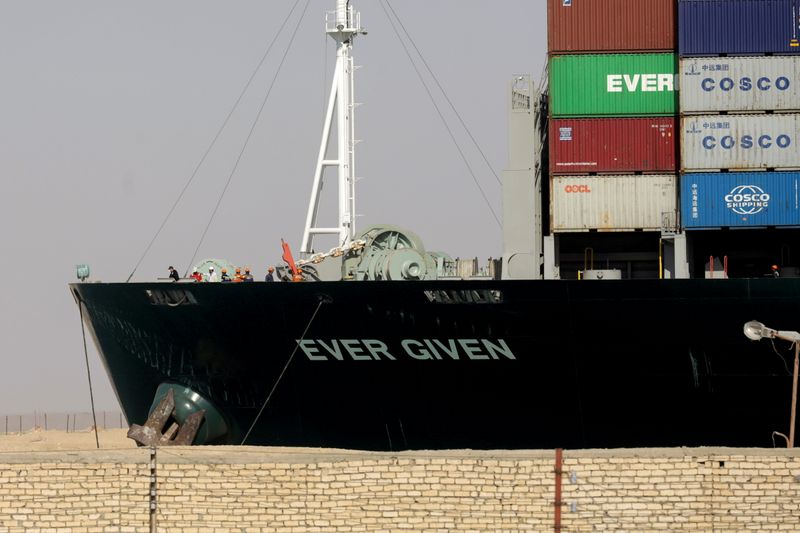 ISMAILIA (Reuters) -The owners and insurers of a giant cargo ship that blocked the Suez Canal in March have reached agreement in principle in a compensation dispute with the canal authority, their representative and the canal’s chairman said on Wednesday.

The Ever Given container ship has been anchored in a lake between two stretches of the canal since it was dislodged on March 29. It had been grounded across the canal for six days, blocking hundreds of ships and disrupting global trade.

“We agreed to settle this issue in a peaceful way without going through the courts and agreed on a final settlement. The deal is being drafted and will be reviewed,” Suez Canal Authority (SCA) Chairman Osama Rabie told a local Egyptian television programme late on Wednesday.

Work is under way to finalise a signed settlement agreement as soon as possible and arrangements for the release of the Ever Given vessel would be made after formalities had been dealt with, Faz Peermohamed of Stann Marine, which represents the owners and insurers, said in a statement.

The SCA had demanded $916 million in compensation to cover salvage efforts, reputational damage and lost revenue before publicly lowering the request to $550 million.

The Ever Given’s Japanese owners, Shoei Kisen, and its insurers have disputed the claim and the ship’s detention under an Egyptian court order.

The settlement reached was seen as “satisfactory” by the canal, Rabie said, adding that the parties had signed a confidentiality agreement so the sum on the deal would not be made public until everything is finalized and signed.

“I want to reassure you that this settlement upheld all of our rights, the cost of the rescue operation and the damages that befell the waterway. We also maintained our relationship with our partners… and the political and economic relations with Japan, thank God,” Rabie said.